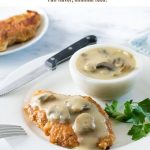 If you are looking for a crowd-pleasing family dinner, this is it. Chicken with mushroom gravy is a full-flavored meal that is fairly easy to prepare. Perfect for a Sunday supper served alongside roasted broccoli and carrots, and buttermilk cornbread!

Chicken breasts are pounded evenly and dusted with a mixture of flour and chicken seasonings, then pan-fried until cooked through. The dusting of flour lightly breads the chicken breast for added texture, which pairs wonderfully with a hearty mushroom gravy. This recipe is similar to chicken fried steak, but easier to prepare and not fully breaded and fried.

How to Make Mushroom Gravy

My mushroom gravy follows the same process as my traditional brown gravy recipe, with the obvious addition of mushrooms. The key to making a good gravy is to gently cook a roux in a small saucepan, continuing to stir as it browns, then slowly add liquid into the roux to form the gravy.

Adding the liquid slowly, while stirring, is important to ensure lumps don't form in your gravy. If you screw up and get a lumpy gravy, don't worry, you can strain out the lumps with a fine mesh strainer.

Honestly, you could probably cook the mushrooms right in the gravy if you wanted. However, I have always sauteed them first in a separate skillet then add them to the finished gravy.

How to lightly bread chicken breasts

The reason they are easier to prepare is because you aren't setting up a full dredging station. Instead, the chicken breasts are pounded evenly and then tossed in the flour mixture which creates a light coating on the exterior of the chicken that browns wonderfully in minimal oil. There is no need to dredge the chicken in beaten eggs or milk, as the natural moisture from the meat will be enough for the flour and seasoning to stick to.

How long to cook chicken breasts in a skillet?

The chicken breasts will take about 10 minutes to cook in a skillet set over medium heat, or about 5 minutes per side, when pounded approximately 1" thick. You can pound them thinner if desired too. You will know the chicken is done when the interior reaches 165 degrees when tested with a meat thermometer.

You do not have to use chicken breasts in this recipe. Substituting boneless skinless chicken thighs would be fantastic as well. Or make the gravy alone and pair it with your favorite chicken meal, such as my slow cooker chicken thighs. The gravy can also be doctored up with fresh herbs, or a dribble of soy or Worcestershire sauce.

Potato Side Dishes for this Meal 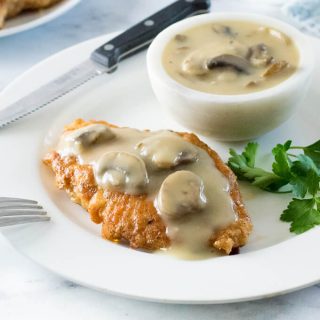 If you like dark meat, feel free to substitute boneless skinless chicken thighs as well.   IF YOU LIKED THIS RECIPE you will love my Creamy Chicken Noodle Soup recipe as well!