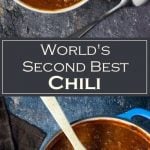 When you are sick of the hype and just want a dang good chili to warm your soul, the world's second best chili recipe is for you!

If you have spent any time on Pinterest, you have no doubt run across the worlds best chili recipe. Actually, they have quite the collection of "World best" recipes for everything. I'm going to let you in on a little secret... unless their mother is the definitive judge, it probably isn't the world's best anything. It is a bunch of hype to get you to repin the recipe. Either that or they are just a narcissist.

So, since the world's best chili is already taken, I decided I would create the "world's second best" chili. Carve out my own niche! Sure, this recipe may not have won first place in the local 4H club's regional semi-quarter-finals chili cookoff in 1986, but it is still a dang good chili recipe.

How do I know it is worthy of the title "World's Second Best Chili"? Well, first of all, I've obviously tried every chili recipe in the world, and this one was clearly the second best. Additionally, I have been refining this recipe for the past 9 years. I don't think there is a single recipe in my collection I've made more extensive notes on. Though, each time I make it a little different, what you find below is my tried and true base recipe.

Regardless of which recipe you choose, there are a few things you can do to improve your chili game.

How to Make The Best Homemade Chili

Rather than using traditional ground beef, ask your butcher for a coarse chili grind. He will know what you mean. Instead of being run through the meat grinder twice, a chili grind uses a coarse grinding plate and the meat only runs through once. This gives your chili bigger chunks of beef and better texture.

Second of all, don't be afraid to let your meat develop a little crust while browning. That deep brown crust will impart great flavor into the chili as it simmers. This means, stir the meat less while browning, letting sit longer.

How to Thicken Chili

One of my favorite trick's I learned to craft the perfect saucy texture is to use chili beans. The liquid in the can of beans is the secret to fortifying the sauce into a richly seasoned bath coating all of the hearty chili ingredients!

However, beyond using chili beans, flour is a great thickener, but the best thickener of all is to simply let the pot simmer longer. As the chili simmers, liquid evaporates, naturally thickening your chili. This also gives your chili seasonings more time to meld as well.

What to Cook Chili In?

Finally, I recommend using a Dutch Oven whenever you make chili.  The thicker sides of the Dutch Oven retain heat better, causing fewer temperature fluctuations during a long cook time. This results in less scorching. 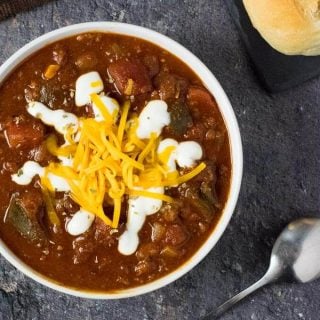 When you are sick of the hype and just want a dang good chili to warm your soul, this is the recipe for you!
5 from 10 votes
Print Pin Rate Save Go to Collections
Course: Soup
Cuisine: American
Prep Time: 10 minutes
Cook Time: 3 hours
Total Time: 3 hours 10 minutes
Servings: 8
Calories: 400kcal
Author: Fox Valley Foodie

IF YOU LIKED THIS RECIPE you will love my Creamy Slow Cooker Chicken Chili Verde recipe too!

If you enjoyed reading my World's Second Best Chili recipe then you should probably like me on Facebook and follow me on Pinterest too. That’s what I would do at least, because if you don’t get to know me but you still use my recipe it is kind of like taking candy from a stranger, and your mom taught you not to do that. Don’t disobey your mom, subscribe to Fox Valley Foodie today.