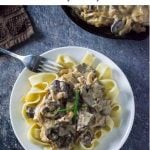 Venison stroganoff features tender cuts of venison steak, mushrooms, and onions swimming in a thick and creamy sauce served over a bed of egg noodles.

Growing up I thought there was only one way venison could be enjoyed: chopped and sauteed with copious amounts of black pepper, butter, and onions. It was the only way my parents made it. Don't get me wrong, this rusticly simplistic dish is still one of my favorite ways to eat venison, but now I have opened my eyes to the endless possibilities this protein provides, such as this venison stroganoff recipe.

What is Venison Stroganoff

This ultimate comfort food dinner is modeled after the classic Russian dinner, Beef Stroganoff. It is fairly identical, except for the obvious addition of deer meat rather than meat. However, I have made a few adaptations to tailor this recipe to the unique flavor of venison. My favorite change is the addition of brandy which adds additional sweetness and depth. If you don't have brandy on hand, bourbon whiskey would be a good substitution, or make it alcohol-free but substituting additional beef broth.

This is a true stroganoff, made from scratch. You will find no shortcuts such as cream of mushroom soup or onion soup mix added. I assure you, the flavor will be better for it!

Best Cut of Venison for Stroganoff

I recommend shoulder steaks for venison stroganoff, with leg roasts being a close second. For absolute tenderness, the best cut of venison will always be the tenderloin, followed by the backstrap, followed by leg roasts. However, I prefer to save the first two premium cuts for higher-end applications such as my marinated venison tenderloin and roasted venison loin recipes where the meat isn't cooked well done and drowned in sauce.

Since the venison steak is going to be sliced thin, any difference you notice in tenderness will be minimal. Additionally, the venison is simmered for 15 minutes which tenders it up some and fully cooks it. I hate cooking venison tenderloin or backstraps until well done, it just feels like a waste of a premium cut, but if you have a surplus of those cuts in your freezer, by all means...

This recipe begins by melting butter in a large skillet or saute pan over medium heat then adding your sliced mushrooms and onions. Saute onion and mushrooms until completely tender. Once tender, add the minced garlic and cook for a couple of minutes, until the garlic is fragrant.

The mushroom mixture with onions and garlic can now be removed from the skillet and the venison is now added. There should be plenty of butter left to properly sear the venison. To get a better sear, we increase the heat to medium-high heat.

Cooking the vegetables and venison creates a lot of burnt on fond accumulating on the bottom of the pan. This is deglazed by adding the brandy, and scraping the bottom of the pan while it sizzles, which will allow it to incorporate into the sauce. Next, add one cup of beef broth and the Worcestershire sauce, and simmer the venison over low heat for 15 minutes, covered.

While the venison and liquid are simmering mix together ¼ cup of beef broth with flour until there are no lumps. It is important it is lump free, or lumps will remain in the final sauce.

Finally, after 15 minutes, add the mushrooms, onion, and garlic back to the skillet with the venison. The flour mixture and sour cream can now be added too. Stir the sour cream sauce together until well combined and serve over egg noodles.

What to Serve With Stroganoff

Egg noodles are my favorite pairing with stroganoff, similar to my beef and noodles recipe, there is just something intoxicating about coating tender egg noodles in a thick and creamy gravy. However, a runner-up recommendation would be to make homemade spaetzle instead.

Although this would be fairly non-traditional, stroganoff would taste great served over a bed of mashed potatoes too! 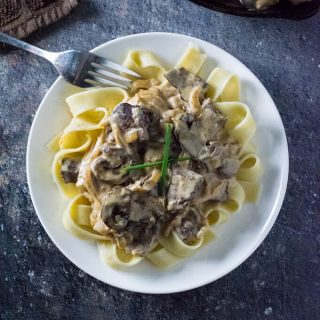 Venison stroganoff features tender cuts of venison steak, mushrooms, and onions swimming in a thick and creamy sauce served over a bed of egg noodles.

Check out all of my venison recipes here!