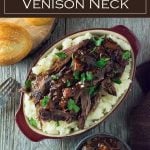 Venison neck is not the most popular cut of meat found on a deer. If venison neck was a student-athlete, it would only be put in the game when the team is up by 30 and they just want a heart-warming 'Rudy' moment. If venison meat was an academic problem, it would be so tough that only a feel-good movie featuring Matt Damon could crack it. However, don't despair. When properly prepared a venison neck roast can be an exceptional tender and flavorful meal!

How to Butcher Venison Neck

Most people I know turn venison neck into hamburger meat. Often, I've seen people unknowingly waste much of it because of the sinew and fat laced throughout can make it almost impossible to remove meat cleanly. However, take heart, because the fat found in the venison neck is actually perfect for braising.

As the venison neck cooks this fat will melt out and help fortify your sauce, resulting in an exceptionally flavorful gravy to serve with the braised venison neck. When butchering venison neck you can simply leave it whole to use for a meal like this. Otherwise, you can grind it up into hamburger, even without trimming away most of the fat. As long as the fat is thin enough to see through, it is good enough for the grinder.

How to Roast Venison Neck

Using a large Dutch Oven is ideal for this recipe because its wide opening can accommodate larger venison necks more easily. Before you start cooking check to see if your neck will fit in the pot if it does not, all you need to do is cut it down to fit and you can proceed with the recipe as written.

The beer and beef broth form the base of the sauce. As the neck cooks the liquid will slowly thicken into a gravy fortified with vegetables and herbs. This can be served alongside the venison or over it. Serving a heaping helping of fluffy mashed potatoes alongside is recommended.

There are two main problems you could encounter when cooking this beer braised venison neck - the meat is too tough, or too much liquid evaporated. Luckily, they are both simple problems to correct.

If you have reached the end of the cooking time and the meat is still not easily shredded with a fork, it just needs to be cooked longer. The longer the meat cooks, the more tender it will become. If you check on the venison and find almost all of the liquid has evaporated, simply add more water to maintain a saucy consistency. Alternatively, you can use any leftover broth or beer too. 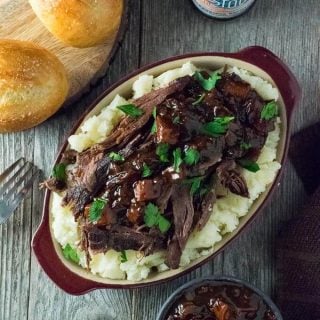 If too much moisture evaporates the neck can dry out and you won't have a gravy to serve over it. If the liquid is getting low just add more water, however adding additional broth or beer is fine too.     IF YOU LIKED THIS RECIPE check out my Roasted Venison Loin recipe too!

If you enjoyed reading my Beer Braised Venison Neck recipe then you should probably like me on Facebook and follow me on Pinterest too. That’s what I would do at least, because if you don’t get to know me but you still use my recipe it is kind of like taking candy from a stranger, and your mom taught you not to do that. Don’t disobey your mom, subscribe to Fox Valley Foodie today.