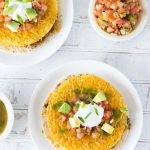 This Mexican pizza is inspired by the classic Taco Bell menu item and can easily be customized to fit anyone's tastes.

I wasn't sure what to call this recipe exactly, it isn't a traditional pizza by any stretch of the imagination, and it isn't a true copycat replica of the iconic fast-food chain. However, it was inspired by Taco Bell, so let's refer to it as "Taco Bell Style" Mexican Pizza.

To no one's surprise, Mexican pizza is not actually Mexican food at all. It is a menu item popularized by the American fast-food chain, Taco Bell, using Mexican ingredients such as refried beans, taco meat and more.

Mexican pizzas are a two layer creation. The bottom layer is loaded with refried beans and seasoned beef and then topped with a corn tortilla which is loaded with melted cheese and additional toppings. Taco bell uses two crispy tortillas, however, I like to use a soft flour tortilla for the bottom later and a crisp corn tortilla for the second layer. Feel free to use whichever you like best.

This is where you can get creative. There is an endless amount of topping you can add to your pizza. Taco Bell keeps it simple with an enchilada style "pizza" sauce, shredded cheese, and diced tomatoes. However, I think this dish can be improved with more exciting ingredients.

Begin by making taco meat with ground hamburger and taco seasoning mix, along with canned or homemade refried beans. While these are cooking I toast my flour tortillas in a hot skillet.

Assemble the pizza by spreading a layer of beans on the flour tortilla, followed by taco meat. Then top with a corn torilla and a generous amount of cheese. These can be placed on a baking sheet and set in a 350 degree oven for 3-5 minutes. Once removed from the oven, add all of your desired toppings and serve. 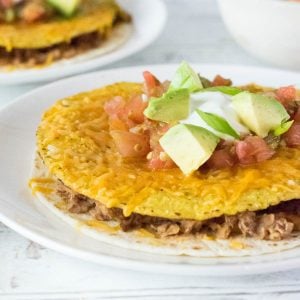 The topping listed are suggestions, feel free to use any of your favorite taco toppings on this dish. As written, this recipe should leave you with extra refried beans and taco meat. This gives you the flexibility to add more to each pizza if you prefer, or make additional pizzas.