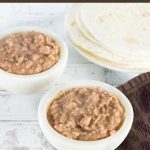 Making your own homemade refried beans from scratch is easier than you think. This recipe shows you how to make them from dry or canned beans.

Refried beans are the perfect side for any Mexican meal. Serve this alongside tacos, taquitos, burritos, fajitas, and more.

Homemade refried beans aren't as complicated as many people fear. It is basically a simple process of cooking the beans, then mashing them with fat and seasonings. Contrary to what the name implies, there is no "frying" involved. Fat just gets heated in a saucepan and the beans are added and mashed together. That is easiest enough, isn't it? Honestly, it similar to making mashed potatoes, but easier.

Pinto beans are the traditional choice for refried beans, however, black beans are also used. For authentic refried beans you will want to start with dry beans. However, you can make easy refried beans using canned beans as well. I'll show you how to make both.

How to use dry beans

The process for using dry beans is longer because the beans need to soak and be cooked until soft. Begin by soaking the beans in water overnight, then the following day you can place them in a pot of clean water and simmer them until soften. Check for doneness after an hour, but they can take longer depending on their size and age.

Tip: Soaking the beans can be skipped if you are pressed for time, just expect to simmer the beans an hour or two longer before they are softened.

You will want to reserve 1 cup of the cooking liquid to add to the refried beans as they cook. This creates the creamy consistency that you are after. Don't worry if it looks too thin, it will thicken as it simmers.

How to use canned beans

Canned beans are the easiest way to make homemade refried beans. They are already cooked so you can skip the soak and simmer. Begin by heating the fat and garlic in your saucepan then add the drained beans. You will want to reserve ⅓ cup of the bean liquid from the can to add with the beans.

Lard is the traditional fat to use with refried beans and the best choice for replicating the classic flavor. However, bacon fat can be substituted instead. Bacon fat will change the flavor of the beans, but it still tastes good. Also, bacon fat is salty, so you will likely want to add less salt to your refried beans.

I like keeping my homemade refried beans pretty basic. However, you can jazz up the flavor by adding peppers, chorizo, or seasonings such as paprika, cumin, or Mexican oregano. As previously mentioned, you can also use black beans instead of pinto beans, such as what I call for in my Chorizo Nachos. 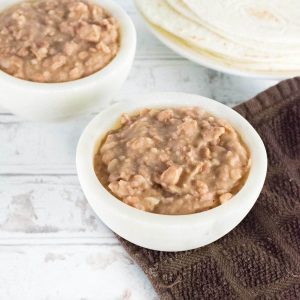 *30 ounces of canned beans can be substituted instead. Drain the beans and reserve the liquid. You will only need to add ~⅓ cup of the canned bean liquid to the bean mash, rather than the 1 cup of cooking liquid called for in this recipe.  You will also want to cut the salt in half since canned beans already contain salt.   IF YOU LIKED THIS RECIPE you will also love my Spanish Rice with Salsa.