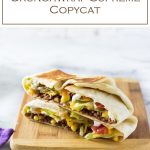 This easy Taco Bell copycat recipe helps you make your own crunchwrap supreme with high-quality ingredients in your own kitchen.

Superheroes don't wear capes. Superheroes craft their kid's favorite fast food meals at home. Seriously, nothing quite impresses my children when I whip up meals they thought only existed in a drive-thru window. Plus, I get an odd sense of satisfaction replicating recognizable dishes from well-known restaurants with ingredients that I hand select.

The crunchwrap supreme is a popular Taco Bell entree that blends the textures of hard and soft tacos into what can best be described as a circular burrito. This is achieved by using a large burrito tortilla wrapped around a tostada shell loaded with taco/burrito fillings.

The most difficult thing about making a homemade crunchwrap supreme is getting the right sized tostada shell and flour tortilla. Large tortillas typically come in 12" size, and tostadas are most commonly found in a 5" size. The problem with this is the tostada shell is too large to wrap with the tortilla once the fillings have been added. You need a 4" tostada shell to wrap the crunchwrap properly, but those are almost impossible to find.

The classic Taco Bell crunchwrap supreme features a flour tortilla, painted with nacho cheese sauce and ground beef topped with a tostada shell, and then sour cream, shredded lettuce and tomatoes are added.

To make your crunchwrap from scratch I recommend using my homemade taco seasoning recipe and making the nacho cheese sauce from scratch as well. However, I won't judge you for taking the easy way out and using store-bought concoctions instead. Taco Bell even sells their own Taco seasoning blend. (affiliate link)

How to Fold a Crunchwrap

To fold your crunchwrap, simply grab the outer edge of the tortilla and bring it in towards the center. Rotate the tortilla slightly, and continue to repeat with the next section of tortilla until all of the edges have been folded in. Apply a little pressure to crimp the tortilla so it holds in place better.

If you don't care about perfectly replicating Taco Bell's crunchwrap, there are an endless number of fillings you can add instead. Personally, I like to substitute Pico de Gallo for the tomatoes, add shredded cheese, or even a roasted tomatillo guacamole, if I am feeling gourmet. I am also a heat junky, so I add my ghost pepper hot sauce before I wrap it all up. 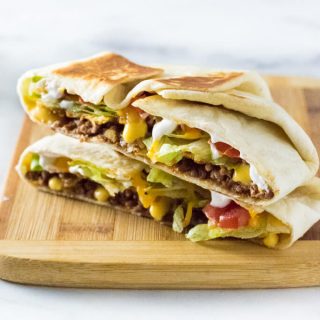 This easy Taco Bell copycat recipe helps you make your own crunchwrap supreme with high-quality ingredients in your own kitchen.

Shredded cheese is not typically added to the traditional crunchwrap, but if you wish to include it, add 1-2 tablespoons of mild cheddar per crunchwrap.   IF YOU LIKE COPYCAT RECIPES check out my insanely popular Big Mac Sauce recipe too!