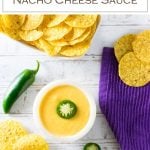 Let's take a look at how to make nacho cheese sauce with real cheese and just the right kick. This easy appetizer is ready in less than 10 minutes.

Sing with me: "Nacho nacho man! I gotta be a nacho man!" That was pretty much my mantra this week. I typically take pride in perfecting a recipe in a couple of tries, but this nacho cheese sauce required six attempts before I was finally happy with it.

In my opinion, a great homemade nacho cheese sauce is thick and creamy, has a subtle cheddar flavor, and just the right amount of kick from jalapeno. Let me stress, jalapeno is key! Just adding cayenne pepper alone may increase the spiciness, but it will be lacking that distinctive classic nacho cheese flavor.

How to Make Nacho Cheese Sauce

It is important not to scrape out the membrane of the jalapeno, since that is where the heat is. The seeds can be removed, if desired, but honestly, I keep those in too.

The base of the sauce is formed by creating a roux. A roux is a mixture of fat and flour that is stirred together while being cooked. Half and half and milk is then added to the roux to form a sauce, and finally, cheese is melted into the mixture.

TIP: It is very important to slowly add the milk/half and half into the roux a little at a time while stirring. If liquid is added too quickly, your sauce won't incorporate properly and can get lumpy.

Why is My Cheese Sauce Grainy

Your nacho cheese sauce will get grainy if you are using the wrong cheese, or dairy product. You need fat in the milk to help the cheese incorporate into the sauce more evenly. Using a low-fat milk, such as 1% milk, made a remarkably worse cheese sauce than when I used half and half. Half and half not only allowed the cheese to melt into the sauce better, but it gave the final sauce a much silkier consistency. Using only half and half would make the sauce too thick, which is why I also use a half cup of milk to thin it out.

I also tested this nacho cheese recipe using only mild/sharp cheddar cheese. Sharp cheddar was the clear flavor winner, but it does not melt into the sauce as well. Instead, you should use a mildly flavored easy melting cheese like Monterey Jack to form the base of the cheese sauce, then melt in the sharp Cheddar for flavor. You will get the benefit of the creamy sauce base from the Jack cheese, and the flavor boost from cheddar... the best of both worlds!

Tip: It is best to shred your own cheese with a cheese grater (affiliate link) when making sauces, as pre-shredded cheese often are coated with anti-caking agents which negatively impacts sauces. 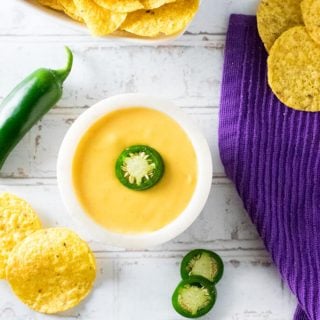 How to Make Nacho Cheese Sauce

IF YOU LIKED THIS RECIPE try my Authentic Pico de Gallo as well!