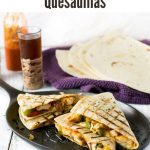 This Chicken Fajita Quesadilla gives you all of the cheesy Mexican flavor you expect from a quesadilla along with the bold flavor of fajitas waiting in every bite!

I like this recipe because it is simple to prepare in a pinch, and it is a much heartier meal than traditional quesadillas. If you are looking for a sauce to serve with this, sour cream is always a safe choice, but my Cilantro Lime Sour Cream Sauce would really shine!

Traditional fajitas are filled with peppers, onion, and chicken, and my chicken fajita quesadillas are filled with the same ingredients, with the addition of plenty of melty pepper jack cheese to make it a proper cheesy quesadilla. Feel free to jazz it up with some hot sauce, or a squeeze of lime juice as well.

Substitution: There is no reason you can't use thinly sliced steak, or even shrimp in this recipe instead.

Begin by sauteing the chicken in a skillet until cooked through. Your chicken should be sliced thinly, so it shouldn't take long. When the chicken is almost done cooking add the onion and pepper. You want to heat these vegetables without cooking them soft. When you are done sauteing them, expect them to retain a bit of crunch.

Your fajita seasoning is added at the same time as the vegetables. If you don't have any on hand, use my homemade taco seasoning recipe and add a splash of lime.

Now the quesadillas just need to be assembled and cooked until the tortilla exterior is crisp and the inside is warm and melty! I like a 12" Calphalon Unison Nonstick 12-Inch Round Grill Pan for this. The 12" size is perfect for accommodating the large tortilla shell, and it leaves beautiful grill marks on the fajita quesadilla when you are finished. Non-stick for easy cleanup certainly doesn't hurt either. However, traditional skillets work perfectly as well.

What to serve with fajita quesadillas

Common accompaniments to fajitas include sliced sour cream, Pico de Gallo, and guacamole. However, you can add a twist to this by substituting my Cilantro Lime Sour Cream Sauce, along with a serving of Roasted Tomatillo Guacamole, or some homemade Verde Salsa. These condiments can be used as dipping sauces, or as fillings added after the quesadillas have been grilled. 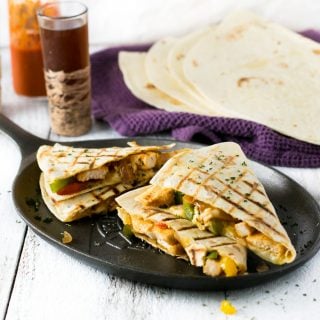 IF YOU LIKE THIS RECIPE check out my One Pot Chicken Fajita and Rice Skillet! Perfect family supper with minimal hassle or mess!

This recipe was originally published November 23, 2016 on FoxValleyFoodie.com.