Reach for that cast iron pan, dust off some memories of grandma's kitchen, and step back in time with this old-fashioned dish brimming with flavor. It is hard to find a more unpretentious meal to serve at dinner time than cooking this easy cube steak recipe.

What is Cube Steak

Cube steak is a very affordable cut of beef from the top round or top sirloin. Similar in size to hamburger patties, steak is "cubed" with an electric meat tenderizer that flattens the beef steak and gives it its distinctive appearance. Because cube steak typically comes from the round or sirloin, it is a relatively lean cut of beef.

How to Cook Cubed Steak

Cube steaks hold the middle ground for tenderness. They are not an exceptionally tough cut of beef, but they still can benefit from longer cooking times to tenderize them a bit more.

There are recipes, such as the popular 'chicken fried steak' which cooks cubed steak in a skillet for a short period of time, however, for this cube steak with mushroom gravy recipe, I found the best way to be when the steak is dredged in a seasoned flour mixture and simmers in beef broth for a nice long time. After two hours it transforms into a deliciously tender cube steak, and very flavorful. The flour mixture, in particular, holds the flavor of the seasonings close to the meat, for a noticeable improvement in flavor when testing this recipe.

Begin by mixing together the flour, paprika, onion powder, and garlic powder in a shallow dish or small bowl and dredge the cube steak in this seasoning mixture, ensuring you fully coat steaks in the flour mixture. Next, add cooking oil to a large skillet and set over medium heat on the stove top. Once shimmering, add the cube steaks to the hot oil and brown steaks on each side.

Now that the steaks have been seared, add the beef broth, soy sauce, Worcestershire sauce, and sliced mushrooms to the skillet with the steaks. Cover the pan and simmer over low heat and cook steaks for two hours. After two hours the steaks can be removed and the remaining liquid and mushrooms should be separated out with a strainer. Reserve the liquid in a bowl.

The starring feature of this easy recipe is the mushroom gravy. The base of this savory gravy is a delicous brown gravy. Mushrooms are simmered in the liquid, infusing their flavor throughout, and added to the finished gravy.

The key to any great gravy is the roux. A roux is a mixture of flour and fat that is whisked together over low heat in a skillet to remove the flour taste. Melt butter in a skillet and whisk in flour, but be careful to keep stirring and not to have the heat too high or the roux will burn. If it burns, there is no saving it, scrape out the roux and start again with fresh butter and flour.

The reserved liquid should be added back to the cooked roux. Add additional beef broth to equal two cups total. The liquid is best added in small amounts at a time to ensure it fully incorporates into the gravy. Once all of the liquid has been added place steak back into the frying pan and continue to simmer until the gravy has thickened. Then serve this hearty home-style dinner immediately.

How to Prevent Lumpy Gravy

When the roux has finished cooking liquid is added to form the gravy. If too much liquid is added, it will not incorporate into the roux fully and lumps will form. It is best to work a few splashes at a time, stirring them into the roux before more is added. Your patience will be rewarded with silky smooth and deliciously rich gravy.

What to Serve with Cube Steak with Mushroom Gravy

When serving cube steak with mushroom gravy there is one side dish that stands head and shoulders above the rest: fluffy mashed potatoes. Mashed potatoes are perfect for soaking up all of the extra luxurious gravy coating your plate. I enjoy mashed potatoes with any of my recipes calling for brown gravy, such as my beef tips and gravy recipe or boneless eye of round roast.

A side of roasted green beans for a green vegetable or Parmesan roasted carrots would each be a perfect pairing. 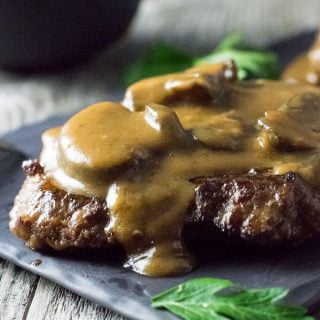 *Cube steaks shrink as they cook. If four cube steaks do not all fit in the same skillet initially you can start them in separate skillets and combine them into one skillet after a few minutes of cooking.   ***The simmering liquid typically reduces down to 1 cup for me, so I need to add 1 additional cup of beef broth to have enough liquid for the gravy. Leftovers should be stored in an airtight container in your refrigerator and best reheated and enjoyed within three days.   IF YOU LIKED THIS RECIPE you will also love my Old fashioned Salisbury Steak recipe too!