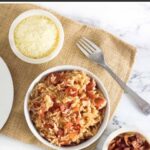 Tomatoes and rice is an incredibly easy and inexpensive southern side dish that can be dressed up to serve as a main dish too.

This budget-friendly meal was likely born in simpler times when money was tight and ingredients were scarce. However, that doesn't mean this simple recipe doesn't still taste great! The tangy tomatoes really brighten up the fluffy rice, while chicken broth adds great flavor to an otherwise simple dish.

Tomatoes and rice is known as a southern dish, but in reality, this was the type of meal that would be found in rural kitchens throughout the midwest as well. When there are a lot of hungry mouths to feed, and not much money to go around, meals like this or the very similar Macaroni and Tomatoes (which uses pasta as a carb rather than rice) would be popular at homes like my grandparents.

The premise of this dish is simple. Rice is cooked in chicken broth, which gives it more flavor than water alone, as well as diced tomatoes and sauteed onion for flavor. Diced tomatoes act at the tomato sauce, giving the rice and bright and tangy bite. Think of it as an American-style Spanish rice.

As one can expect, clever home cooks jazzed this recipe up in numerous ways. My preferred way is simply adding chopped bacon and parmesan cheese (my grandma would have added hotdogs). Easy and delicious!

The basic game plan for making this southern Tomatoes and rice recipe is to saute the onions and garlic, then simmer everything together with rice until the liquid has been absorbed. Pretty easy right?

To begin, melt the butter in a saucepan set over medium heat and add the diced onion. Saute, while stirring occasionally, until the onions have softened, then add garlic and saute for an additional two minutes.

Everything is now ready to be cooked together. Add the bay leaf, rice, chicken broth, can of tomatoes, and seasonings to your saucepan and bring the liquid to a simmer. Cover with a lid and let gently cook over medium-low heat for 15 minutes, or until the rice is tender. 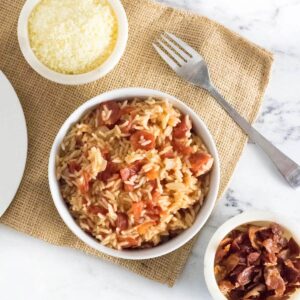 Tomatoes and rice is an incredibly easy and inexpensive southern side dish that can be dressed up to serve as a main dish too.
No ratings yet
Print Pin Rate Save Saved
Course: Side Dish
Cuisine: American
Prep Time: 5 minutes
Cook Time: 20 minutes
Total Time: 25 minutes
Servings: 4
Calories: 250kcal
Author: Fox Valley Foodie

This old fashioned recipe tastes incredible with the addition of bacon and/or Parmesan cheese. An equal amount of bacon grease can be used instead of butter for added flavor. I recommend using 4 ounces of bacon if adding it to this recipe. Then top everything with grated Parmesan when serving.