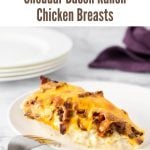 Is bacon an emotion? I think it must be because I'm pretty sure I'm feeling bacon right now. There is just something intoxicating about a salty bite of crisp bacon jumping off a tender piece of chicken. Mix in the robust flavor of ranch seasoning and gooey melted cheese and now you really have my attention!

This is a keto-friendly dinner that will be devoured regardless if you are on the diet or not. The secret to the smothered creaminess of these Cheddar bacon ranch chicken breasts is using cream cheese. I think using ranch dressing is often the obvious choice, but its texture is too thin to work well. It will simply melt into a puddle whereas cream cheese clings to the chicken like a child clings to his mother in a clown museum.

How to assemble this dish

Pre-cook the bacon until it nice and crispy, once cooled you can crumble it. The cream cheese and ranch seasoning can be mixed together while cooking the bacon, then spread half of the mixture on the bottom of a baking pan. The chicken breasts are placed on the mixture in the pan and topped with the remaining half, along with cheese and bacon.

How to Bake Smothered Chicken

It is best to cover the chicken in foil for the first 15 minutes of baking, this helps prevent the cheese from over-baking and also helps your chicken bake faster.

I always recommend using a digital oven thermometer when cooking chicken to ensure it is neither under or overcooked. You are aiming for 165 degrees, which should take approximately 30 minutes in a 400-degree oven. Although, your baking time will vary depending on how thick your chicken breasts are.

How to Customize this recipe

You can use any cut of chicken you want, such as tenderloins or boneless dark meat. Heck, this would even taste great with pork chops! The cheese can be customized as well, feel free to swap out cheddar for your favorite.

Although I haven't tried it, baking this dish over a bed of hashbrowns would likely taste amazing! Although it needs to be the frozen hashbrowns, freshly shredded hash browns don't bake well.

What to serve as a side dish?

I've spent much of last week working on this recipe. Initially, I wanted to include a full meal in a pan by roasting potatoes with the chicken, but even when diced small the potatoes simply wouldn't cook fast enough. You could make it work by par-boiling the potatoes first, but I wanted to keep the recipe simple and accessible for most home cooks. Instead, I recommend pairing this recipe with one of the side dishes below. 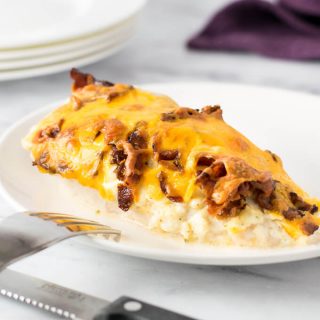 IF YOU LIKED THIS RECIPE you should try my Buttermilk Ranch Potatoes au Gratin recipe!

This recipe was originally published on FoxValleyFoodie.com on September 18, 2017.