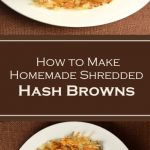 Do you ever discover yourself cooking a bag of frozen hash browns and find yourself thinking, “You know, these are good and super easy to make… hmmm, almost too easy!” Would your life be better if making your favorite breakfast was a little more time-consuming, required more energy, and ran a much higher risk of utter failure? If so, keep reading! If not, check out my easy hash brown casserole instead!

I went slightly overboard perfecting how to make homemade shredded hash browns. Eating frozen hash browns wasn’t good enough for me; I needed to know how to make them from scratch and how to do so perfectly. So for about a year, I stocked up on the required simple ingredients and made them multiple times a week until I could fully understand each facet of the process. Why did some recipes call for soaking the potatoes and others rinsing them? Is changing the water or using ice cubes really necessary? I don’t like blindly following recipes. I want to know why I am doing something so I can figure out for myself if there is a better way.

Here is what I learned:

(Making hash browns from scratch wasn't good enough for me, I eventually went on to also create Cheddar-Crusted Homemade Hash Browns! You need to check them out.)

First thing I learned: Peel the potato only if desired. This will not affect the final dish. Some like the rustic look of potato skins in their food, others do not. Pick a side. Then shred the raw potatoes with a box grater and quickly move onto the next step to prevent oxidation.

Second thing I learned: Some recipes call for soaking the potato in ice water, while others just say to rinse the shreds. What you are actually doing here is removing the excess starch from the shreds so you get a crisper final product. Cold water prevents oxidation and if you decide to soak the potatoes changing the water will remove more starch and speed the process. Personally, I prefer to rinse the shreds in a strainer under the faucet until the water runs clear because it is easier to tell when the objective has been accomplished. When the water runs clear I know the starch has been removed.

Third thing I learned: For the crispiest hash browns the stored water must be removed from the grated potatoes because you can't have the potatoes holding too much moisture. There are multiple ways to accomplish this. Personally, I like to just grab a fist full and squeeze it over the sink. However, if you are cooking for others you may want to ring it tightly in cheese cloth, paper towels, or just squeeze out the liquid in a ricer. Whatever method you choose, be sure to work in batches so the water can easily disperse. The more water that is removed, the crisper the hash brown will be. Once the water has been drained, mix in salt and pepper.

Tip: I don't recommend using a salad spinner to remove the water, you will be left with too much water in the potatoes to make crispy homemade hash browns.

Fourth thing I learned: Heat a nonstick pan over medium high heat (This pan has been my main workhorse for years and I would buy it again in a second) with a mixture of enough oil and butter to coat the bottom of the skillet in a thin layer. Butter gives hash browns better flavor, but adding oil prevents the butter from burning by raising its smoke point. The fat mixture lies more thinly in the pan and also coats it more evenly which allows for more even contact with the hash.

Fifth thing I learned: Place the hash in the hot pan and press with a spatula to evenly flatten the shreds and brown the potatoes. Thinner is better as this will ensure everything cooks. If you desire healthier hash browns you can use a minimal amount of oil/butter, but using more fat will result in deliciously crispy hash browns.

Sixth thing I learned: Once the bottom is crispy you can use a spatula to divide the hash brown into four sections and then proceed to gingerly flip them. OR you can flip the whole thing in the pan with a quick upward flick of your wrist… don’t worry your dog will love you as you practice. Once flipped proceed to cook until the bottom is crisp.

Once you have finished cooking your homemade shredded hash browns you can serve them immediately or place them on a baking sheet in a warm oven to keep them warm while you work on additional batches of deliciously crispy potaotes.

How to Prepare Hash Browns in Advance

I never had good results with par-cooking the hash. Blanching the potato shreds did prevent oxidation but the hash browns never stayed together when cooked and the flavor was off.

I doubt that I just spared any of you from a year-long sabbatical to fully understand the inner workings of the perfect shredded hash brown. However, if I have perhaps given one person a sense of personal satisfaction for not only following my recipe but actually understanding what they are doing and why… then I am just as happy.

If you need a breakfast suggestion to pair this with, I highly recommend my English Muffin breakfast pizzas.  Check out the recipe, I think you will love it! Melted cheese, fluffy scrambled eggs, sawmill gravy, and sausage, all atop a crispy English muffin!  What's not to love? 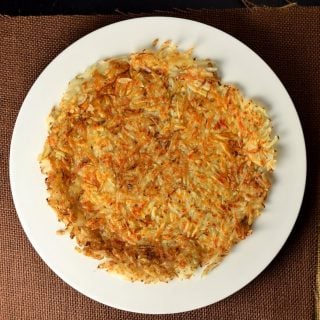 *Onion powder, paprika, or garlic powder can also be added if you desire more seasonings.

This recipe was originally published on FoxValleyFoodie.com June 3rd, 2012.