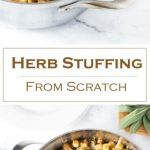 I think you will agree, making Herb Stuffing from scratch tastes better than Stove Top. No box can compete with the vibrant flavor of fresh herbs bursting in every bite!

It’s fluffy, roughly rather puffy,
Fun, Fun, Fun, Fun
But the most wonderful thing about stuffing
Is that Stove Top’s not the only one!

Ok pardon my lame poem. But let’s be honest, you’ll be singing it later. You’re welcome.

For years, Stove Top stuffing has been my guilty pleasure. I pretty much require it at every holiday gathering. Yeah, I know it pretty much has the texture of wet paper mache, but there is just something I just love about herb stuffing!

Stuffing is one side dish I rarely liked people’s made from scratch version better. I’ve never cared much for many of the additions people put in it. As far as my tongue is concerned, a good stuffing should be bursting with herb flavor, seasonings and perhaps some salty Parmesan. So finally a few years ago I set out to see if I could create my own version of Stove Top stuffing and created this herb stuffing made from scratch.

Well, I am happy to report, I succeeded. It is better than Stove Top. Why is my homemade stuffing better? It is baked, so it holds its shape better, it utilizes fresh herbs for a more exciting burst of flavor, and it is coated with a crust of Parmesan! What's that you say? You don't see any Parmesan cheese in my photos? Well, to be honest, I forgot. Oooooops!!!

This Herb Stuffing from Scratch recipe is the perfect complement to your holiday meal. It also reheats nicely in the microwave if for some reason you have leftovers.

My stuffing is made with unseasoned stuffing croutons. Make sure you get the unseasoned ones or your stuffing will be rather salty once you add in additional seasonings. The croutons are softened with chicken or turkey broth, but homemade stock can be used as well.

The primary flavor of the herb stuffing comes from fresh vegetables and herbs. I do not recommend using dried herbs or your stuffing will have a noticeably more stale flavor.

What to Serve with Stuffing

Stuffing is traditionally served as part of holiday meals featuring entrees such as a Thanksgiving Turkey or Standing Rib Roast. Other common side dishes include fluffy mashed potatoes, green bean casserole, and brown sugar glazed carrots. 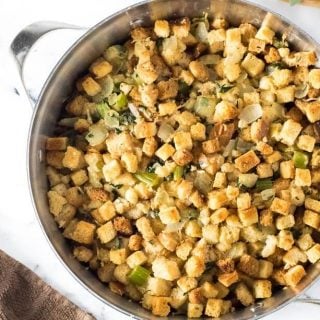 IF YOU LIKED THIS RECIPE you will love my Creamy Mushroom and Swiss Stuffing too!

This Herb Stuffing recipe was originally published on FoxValleyFoodie.com December 5, 21015.

If you enjoyed my Herb Stuffing from Scratch recipe then you should probably like me on Facebook and follow me on Pinterest too. That’s what I would do at least, because if you don’t get to know me but you still use my recipe it is kind of like taking candy from a stranger, and your mom taught you not to do that. Don’t disobey your mom, subscribe to Fox Valley Foodie today.