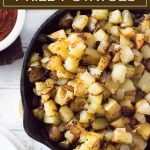 No one quite does comfort food quite like our friends below the Mason Dixon line. I'm in firm belief, southern grandmothers are culinary wizards wielding cast iron skillet magic wands. However, rest assured, there is no magic needed to replicate this rustic side dish, just some simple ingredients like potatoes, onions, and glorious fat.

Southern fried potatoes are essentially breakfast potatoes with a combination of pan-fried potatoes and onions. As the name implies, this is a popular southern dish, however, it is commonly prepared in other regions as well, often referred to as country fried potatoes (which can vary in preparation).

The basic idea behind creating these deliciously crispy potatoes is to cook the them in a large skillet until tender and leave them alone long enough to form a crisp brown crust before flipping and creating more crust on the other side.

Yukon gold and red potatoes both taste great when cooked in a skillet, and you can certainly substitute them in this recipe if desired, however, they won't stay as crisp as russets. Same with sweet potatoes, which will quickly become mushy.

Do I need to boil my potatoes first?

No! Do not boil potatoes prior to cooking. The boiling water will succeed in softening them, but you will also ruin the beautifully crisp texture achieved from pan-frying. Just relax and trust they will cook properly in your skillet.

My recipe generically calls for cooking oil and butter, because any ol' vegetable oil will work just fine. However, oils with a higher smoke point, such as canola oil work best for higher heat applications in a skillet. If you like using olive oil, make sure to grab regular olive oil, not extra virgin.

However, in my humble opinion, if you want to go all-out southern on this recipe, the best fat to coat these crispy fried potatoes in is rendered bacon grease. Bacon drippings add a great smoky flavor to any dish. Whichever oil you choose to use, to get the best fried potatoes just make sure to use enough oil to cover the bottom of a large skillet, approximately ¼ cup.

How to Cook Potatoes in a Skillet

The secret to getting perfectly cooked tender potatoes in a skillet is to cook the cubed potatoes covered over medium heat for 10 minutes, then finish cooking them for an additional 10 minutes uncovered on medium-high heat, or until done. Try to lay the raw potatoes in a single layer as best as possible, this will get you the best crust.

Cooking them covered traps in the heat which will help ensure you get tender, fluffy, potato cubes, then cooking them uncovered allows you to get the crisp golden brown crust to form in the hot oil. The best pan to use is a nonstick skillet or the classic cast-iron skillet. Other skillets tend to make the potatoes stick, which removes the crispy crust you crave.

How to store leftovers?

The leftover potatoes can be stored in a refrigerator for approximately four days. Make sure to place them in an airtight container to prevent odors in your fridge from changing the flavor.

How to reheat leftovers?

These diced potatoes reheat well in a microwave in small batches. However, they won't retain their crispness. To preserve the texture better, reheating them in a skillet is a great choice. You could even place these on a baking sheet and reheat in a 350 degree oven until heated through.

This is my favorite type of side dish because it is a blank canvass that can be tweaked to match everyone's tastes. An easy way to jazz up the flavor of this dish is by adding your favorite vegetables, herbs, and spices.

What To Serve with Southern Fried Potatoes

Like my homemade hash browns, southern fried potatoes are one of my favorite breakfast side dishes. You can customize this recipe by cooking breakfast sausage with it, or simply serve it with scrambled eggs. However, I personly love a couple over easy-eggs resting on top of it, so the potatoes can sop up the runny yolk!

You don't have to limit yourself just to breakfast though. This is an easy side dish to serve with a variety of meals. I would be delighted if someone served me a side of these hearty potatoes with a great meatloaf. This is a great pairing for meatloaf particularly since the meatloaf occupies the oven and the potatoes can be prepared on the stove top. Round out your meal with a side of Southern Fried Cabbage or Southern Fried Corn. 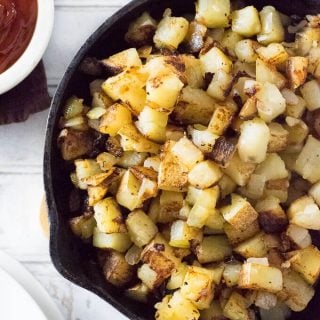 If your potatoes are cubed larger, or if you are cooking at a lower heat, it will affect how long your potatoes take to cook. If your potatoes are undercooked at the end of the listed cooking time, simply cook them longer until tender. If you wish to add seasonings to this recipe,  garlic powder, onion powder, paprika are all great options!   IF YOU LIKED THIS RECIPE check out my Scalloped Potatoes and Ham recipe too!