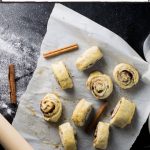 This is a recipe that came down from my grandma who spent many hours baking pies with my mom and her siblings when they were young, and inevitably there would always be excess leftover scraps. This was certainly not a bad problem to have; though, while some people may be content to just snack on the pie dough, my grandma rolled them into these delectable cookie-like treats with just a few simple ingredients.

What are Pie Dough Cinnamon Rolls

The ingredient quantities you will need will vary depending on how much extra pie crust scraps you have on hand, but don't worry, this recipe is all about eyeballing everything anyhow.

Lay out your leftover pie crust dough and roll it flat with a rolling pin, into a rectangle, using the same thickness you would typically use for a pie crust. Liberally paint soft butter over the entire crust facing up with a butter knife. Butter provides the "glue" for the cinnamon and sugar to stick to, so you want to use plenty of it.

Tip: Using room temperature, or softened butter will ensure it spreads easily on the dough. You can use melted butter as well.

Sprinkle a generous amount of sugar and cinnamon over the butter to fully coat, being sure to reach the edges. Then cut the pie dough into one and a half inch slices with a sharp knife or pastry cutter and roll them up into individual cinnamon rolls.

Bake the cinnamon rolls on a cookie sheet or sheet pan lined with parchment paper in a 350 degree oven until no longer raw, up to 45 minutes. When fully cooked they taste like a cinnamon roll with the texture of a crisp cookie, and be threatening to turn golden brown. 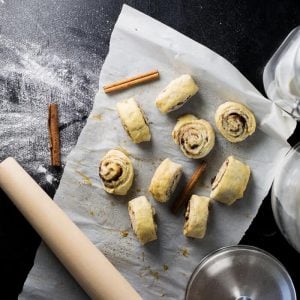 This easy recipe was originally designed to use with leftover pie dough scraps. The exact ingredient quantities are less important than just ensuring you are applying a generous amount of butter, and cinnamon-sugar mixture over the fresh pie dough.    Leftovers should be stored in an airtight container.

This recipe was originally published on FoxValleyFoodie.com June 23, 2015.