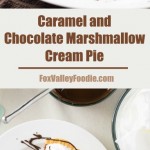 This Caramel and Chocolate Marshmallow Cream Pie is loaded with decadent layers of caramel, peanuts, and chocolate marshmallow cream!

As the weather cools, the ovens heat up!  It is baking season again ladies and gentlemen! However, you won't need the oven very long for this Caramel and Chocolate Marshmallow Cream Pie recipe. The only thing you need to bake is the pie crust, the rest can easily be made on the stove top.

So how does this pie taste? Well, imagine a smooth layer of chocolate coating a flaky pie crust, while a salty, nutty, caramel layer rests on top in all its sticky glory, only to have that layer blanketed by a fluffy, rich, chocolately layer.  I guess what I'm trying to say is, it's decadence at its finest!

Start with preparing your pie crust. If using store-bought crust just follow the instructions on the packaging to bake it. Otherwise, take guidance from the pie crust recipe you are using. Let the crust cool prior to adding the filling.

Melt a third of the chocolate and one tablespoon of butter and combine together until smooth. Paint the interior of the pie crust with this mixture then set it in the refrigerator to cool.

While it is cooling make the caramel layer by adding heavy cream to a saucepan along with the caramel bits. Melt over low heat and gently stir together, then add peanuts to this mixture. Let the mixture cool then pour it over the chocolate in the pie crust.

Create a marshmallow layer by adding the marshmallow cream, remaining chocolate, vanilla extract, and milk into a saucepan and melt together over low heat. Again, let this mixture cool.

Beat 1 cup of heavy whipping cream until stiff peaks form, then gently fold this into the marshmallow mixture. Pour this into the pie until the crust is full, then set the pie in the refrigerator for at least 3 hours to firm up.

Can I use marshmallow fluff instead of creme?

Yes, they can be substituted as they are essentially different brand variations of the same product. 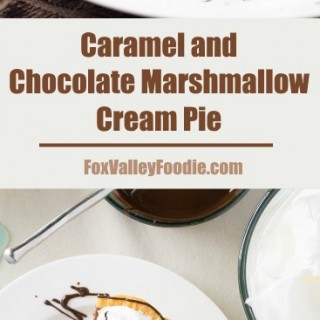 You can use a store-bought pie crust or make your own from scratch. Either option works great.