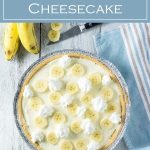 This easy no-bake banana pudding cheesecake is an effortless dessert that can be prepared in minutes with no cooking required.

I literally dreamed up this recipe. Honestly. I didn't know banana pudding cheesecake was even a thing until Saturday when sleeping silently in my bed, I dreamed I created a banana pudding cheesecake. My dream was so specific it even included the ingredients and quantities listed in the recipe below. So yeah, this recipe is so easy you can literally do it in your sleep!

When I awoke Sunday morning the first thing I did was google banana pudding cheesecake, to my surprise, it is a fairly popular dessert that combines the creamy goodness of banana cream pie with the more sophisticated richness of . Who knew?!? Well, I guess everyone but me, apparently.

How to Make Banana Pudding Cheesecake

The recipe in my dream was an exceptionally simple no-bake cheesecake, anyone can do it. It utilizes Instant Banana Cream Pudding blended with cream cheese for the filling and is placed in a prepared graham cracker you can purchase at the store.

I made two small changes to the ingredients I settled on in my dream. I used two blocks of cream cheese instead of one, which gives it a firmer texture, and rather than using milk to make the pudding, I switched to coconut milk because I love the flavor combination of bananas and milk.

This is a great recipe to customize to fit your own tastes. As mentioned, I used coconut milk rather than traditional milk in the recipe, but there is no reason you cannot use milk instead.

Other customization ideas include adding a splash of bourbon for an adult dessert, or changing out the pie crust with a prepared chocolate crust instead. You could even make this recipe with any other flavor of pudding as well.

If you wish to enhance the classic flavor of cheesecake you can even add a splash of lemon juice, which gives cheesecake the slightly sour tanginess, and a bit of vanilla extract as well. As always, play around with the recipe and make it your own! 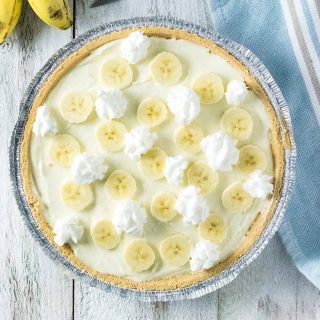 This recipe is made much easier when using a [easyazon_link identifier="B00C0QJY40" locale="US" tag="foxvalfoo-20"]hand mixer[/easyazon_link].   IF YOU LIKED THIS RECIPE check out my Butterfinger Pie recipe too!