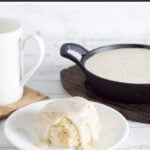 This classic peppered gravy recipe is the perfect sauce when you are craving a hearty, stick-to-your-ribs meal, just like grandma used to make.

I love this simple recipe because it is so easy to make, using only five simple ingredients that I suspect you already have on hand! So throw away those gravy packets because the flavor of this homemade gravy is so versatile you'll look for ways to use it on just about anything.

Peppered gravy is a classic white gravy that uses a milk base to create a creamy texture, rather than a stock base like brown gravy. With an assertive peppercorn flavor, it is very similar to sawmill gravy, which is a sausage gravy seasoned with black pepper. The main difference is that peppered gravy doesn't include ground sausage, making it a great choice to slather over meats like pork chops.

You will occasionally hear it called black pepper gravy, or white pepper gravy. The only difference is whether you use black pepper or white pepper in the recipe. Similarly, this can be called a country gravy, which typically uses the same ingredients. However, I find peppered gravy is typically a little more assertive in its use of ground pepper.

Customize this recipe by adding fresh herbs and seasonings for extra flavor. Fresh thyme or a bay leaf would each be a perfect addition, or add some crushed red pepper flakes to craft a flavorful gravy with a kick.

Make this peppered gravy recipe by first creating a roux by melting your butter in a saucepan or large skillet over medium-low heat (you can use medium heat, you just have to watch it more closely so the flour doesn't burn), then whisk flour into the melted butter. Let it cook for a couple of minutes to eliminate the raw flour taste.

Add the milk to your roux a little at a time to ensure it blends smoothly. You will want to whisk continuously while adding the milk to ensure lumps don't form. Once all of the milk has been added the salt and pepper can be added to the gravy as well.

Simmer the gravy for a few minutes. It will thicken as it simmers. Once it has reached your desired consistency it can be served immediately in a gravy boat or small bowl.

How do I prevent gravy from being lumpy?

The secret to making lump-free creamy gravy is to add your liquid into the roux a little at a time while whisking. It is important to ensure you have completely incorporated the milk into the flour and butter mixture before adding more. If too much liquid is added it doesn't incorporate well and lumps form.

How do I get lumps out of gravy?

If you weren't able to prevent lumps from forming in your gravy, don't fret. All you need to do is grab your strainer and pour the gravy through it. The lumps will be separated out.

Can I freeze gravy?

Yes, you can freeze this gravy for up to three months in a freezer-safe airtight container.

How do I reheat gravy?

Gravy is most easily reheated in your microwave. Place it in a microwave-safe bowl and reheat for 45 seconds at a time, then stir. Repeat until it is heated through. When reheating, you often need to add a little more liquid to it because it tends to thicken up in the refrigerator.

How do you fix gravy that is too thick?

Gravy gets too thick if it is simmered too long, or if it sits out too long. Thinning it back out is easy. Just dribble a small amount of milk into it and stir it in.

How do you fix gravy that is too thin?

If your gravy is too thin it means you did not simmer it long enough. Put it back on the stovetop and simmer until it thickens to your desired consistency. 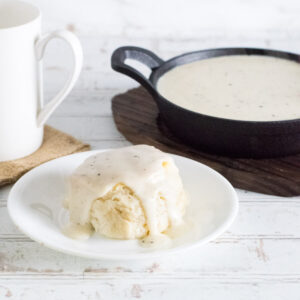 You can use ground black pepper or white pepper in this recipe. The flavor will be the same, the only difference will be the appearance.    This creamy gravy would be an amazing sauce for my easy breakfast pizzas!