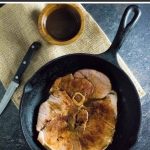 Red eye gravy is the perfect easy southern breakfast to wake you up in the morning. This poor man's gravy can be made with as little as two simple ingredients, country ham drippings and a strong cup of coffee, but I like adding a couple of flavorful twists to it as well. For some the distinct flavor of this gravy is an acquired taste, but most coffee lovers will catch on quickly.

However you choose to make it, you will be rewarded with an easy, hearty, and delicious ham breakfast. This flavorful thin sauce is not only incredible to serve over a fried country ham, but also goes great with most any hearty breakfast side dish too!

What is authentic red eye gravy?

Authentic red eye gravy is a southern favorite often made exclusively with the drippings from a country ham seared in grandma's cast iron skillet, which is then deglazed with black coffee. The fat gives the coffee a more luxurious mouthfeel, while also adding flavor, making red eye gravy perfect for painting over ham, biscuits, or grits.

While you can keep this recipe simple, I think the best red-eye gravy includes a couple additions like adding brown sugar and butter for more flavor and a wonderfully silky texture. Alternatively, some diners in the south will add equal amounts of Coca-Cola with the coffee for sweetness.

Where did Red Eye Gravy Come from?

According to lore, this gravy was inspired by then General Andrew Jackson who asked his very hungover cook to prepare him ham with gravy as red as his eyes. The men hearing this began to refer to it as red eye gravy from that point forward.

Others however claim red eye gravy got its name simply from the appearance of the gravy resembling an eye once the gravy settles.

Ingredients Needed for My Recipe

Ham steak - Country ham slices are ideal if you can find them, otherwise any ham steaks will do. I recommend finding a fatty one because it will render best.

Strong Black coffee - Save yourself a half cup of brewed coffee before you drink the pot in the morning.

Brown sugar - Sugar is the most common added ingredient to this recipe. It takes the edge off the bitterness of the coffee. Personally, I think brown sugar works better than white sugar because the flavor of molasses works really well with ham.

Butter - Although not a choice for purists, butter adds incredible flavor to the sauce while giving it more body as well. This is my secret ingredient.

Optional - Although I do not find it nessesary, you can add seasonings such as black pepper or cayenne pepper to further customize the flavor.

Begin this country ham with red eye gravy recipe by setting a large skillet, such as your large cast iron skillet, over medium-high heat and add a thick country ham steak to the hot pan. Cook in the skillet until heated through and seared golden brown on both sides. The ham will render fat as it cooks.

Note: Reduce the burner to medium heat if the ham is cooking too fast.

Remove the cooked ham from your skillet and add coffee to the pan drippings. Deglaze the pan by scraping the bottom of the skillet with a wooden spoon or a whisk to loosen any browned bits of ham. Add a tablespoon of butter and brown sugar, and stir everything to combine.

Let gravy simmer briefly until the butter and sugar have dissolved, remove from heat and pour the gravy into a serving bowl or gravy boat and bring to the breakfast table to serve over ham.

What to serve with Red Eye Gravy 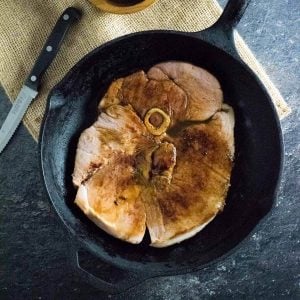 For a different twist, this recipe can also be made with bacon grease.