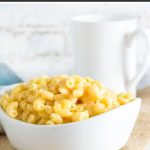 I made this incredible mac and cheese without milk, yet it is still wonderfully creamy and loaded with flavor! Best of all, unlike traditional homemade mac and cheese, my recipe even reheats well without the sauce breaking! The secret is in my milk substitute!

I promise if you are looking for an easy mac and cheese recipe, using simple ingredients, this one is fantastic... even if you have milk on hand! Expect this to quickly become a family favorite! Plus, you can have it ready in under 15 minutes!

Do you need milk for mac and cheese?

Milk is typically an essential ingredient in any homemade mac and cheese recipe because it (or similar liquids such as heavy cream) forms the backbone of the cheese sauce. This is true for regular milk or alternatives such as soy milk or almond milk. Without some sort of milk, the sauce has to be completely recreated using different ingredients and methods.

However, you can make delicious mac and cheese without milk by melting your favorite cheeses into a mixture of cream cheese, sour cream, and pasta water. It actually works very well! These are the best substitutes because the cream cheese serves as a binder, the sour creams lightens the mixture and adds tanginess, and the pasta water thins it out into a sauce consistency while adding binding power. Best of all, adding cream cheese to your cheese sauce allows leftovers to be reheated without the sauce breaking into an oily mess!

How to make macaroni and cheese without milk

Begin making this macaroni and cheese recipe without milk by boiling a large pot of salted water. Add the elbow noodles and cook macaroni according to the package instructions.

While the noodles boil, melt the cream cheese and sour cream in a separate large saucepan over medium-low heat (reduce to low heat if the sauce starts bubbling). Add in the ground mustard, and the pasta water once the noodles are almost done boiling.

Note: You want to wait to use the pasta water until the noodles have almost finished boiling because you want the water to be loaded with starch for its binding power.

Stir the cheese shreds into the sauce mixture until melted and well combined. At this point, the noodles should be finished boiling, so the cooked noodles can be drained from the water and combined with the sauce.

Note: You can actually make this a one-pot homemade mac and cheese by draining the noodles and combining all of the sauce ingredients with the noodles, however, I prefer the added control of making the sauce in a separate pan.

This recipe yields a wonderfully creamy stovetop mac and cheese, but for more texture, you can melt butter in a saucepan with bread crumbs and sprinkle the mixture on top of the mac and cheese, set it in a baking dish or casserole dish, and broil it in the oven until the breadcrumbs are golden brown.

Feel free to change up the types of cheese used to fit your personal tastes. Any cheddar works great, as does any mild-tasting cheese such as Pepper Jack, Provolone, or even Mozzarella cheese. Parmesan cheese can be added in addition to the cheeses included in this recipe.

Flavorings such as black pepper, onion powder, hot sauce, or even horseradish can be added to the cheese mixture to bring the flavor in a new direction.

How to Reheat Mac and Cheese

The cream cheese used in this recipe helps the mac and cheese reheat really well. Simply place leftover mac and cheese in a bowl and set in the microwave. Reheat for one minute at a time, stirring after each minute, until it is heated through. The leftovers should be stored in an airtight container in the fridge and enjoyed within five days. 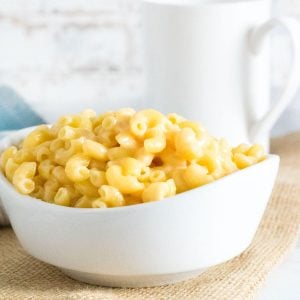 Mac and Cheese without Milk

If your pasta water isn't ready yet you can start melting cheese into the sauce and adding the water later. You want to use the pasta water when the noodles are almost done boiling because it will have more starch and binding power.