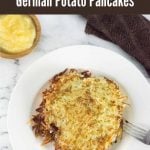 Kartoffelpuffer are German potato pancakes fried up crisp and golden in a skillet and traditionally served with applesauce.

Though this is a traditional German recipe, it is still popular in the United States in areas with German heritage, such as Wisconsin. Requiring only simple ingredients, this recipe is inexpensive to make which may explain part of its longevity in rural areas such as where I grew up.

Kartoffelpuffer are potato pancakes popularized in Germany. They are made with shredded potatoes dusted in flour, egg, and seasonings. I use a box grater and coarsely shred them the same way I do when making homemade hash browns. However, you can shred them finer if you prefer.

Potato pancakes are very similar to latkes, separated by only a few nuanced differences, and depending on the recipe variation sometimes there are no differences at all other than Kartoffelpuffer being a German creation and latkes being a Jewish dish.

How to make Kartoffelpuffer

Begin by peeling and shredding your russet potatoes. As they are shredded add them to a large bowl of water. Soaking them in water prevents them from oxidizing and turning gray, brown, and black. In a separate dish combine flour, eggs, and seasonings. Mix together. Squeeze the potatoes of excess liquid then add the potato and onion to the flour mixture and stir to fully combine.

Fry the potato pancakes in a skillet set over medium heat. Add enough oil to coat the bottom of the skillet in a thin layer, then add ½ cup of the pancake mixture. Press it flat into a disc and let cook for 3 minutes per side, or until golden brown. You will likely have to work in batches to cook it all. You can keep the finished pancakes warm in a 250 degree oven.

What to serve with potato pancakes

Applesauce is the most common accompaniment to German potato pancakes. However, these are also frequently served with yogurt or sour cream. Alternatively, it can be served as a sweet dish with powdered sugar, however, I would personally omit the grated onion if I were serving them with sugar. 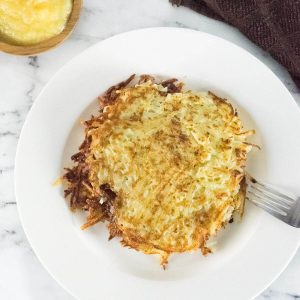 Customize the ingredients to fit your tastes. Any of your favorite fresh herbs are a great addition.   IF YOU LIKED THIS RECIPE you will also love my Deep Fried Sauerkraut Balls.