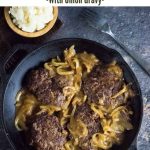 This meal is easy, affordable, comfort food that is best served over a bed of fluffy mashed potatoes. You can round the meal out further with some herb stuffing to sop up any leftover gravy, along with a side of roasted green beans.

Hamburger steak with gravy is exactly what it sounds like, ground beef is formed into individual steaks and smothered with onions and brown gravy. These are not hamburger patties, such as you would use for making burgers, they are actually more similar to meatloaf since the ground beef is mixed with egg, breadcrumbs, and seasonings.

Best ground beef to use

I recommend using 80/20 beef, or ground chuck for this recipe, which has a similar fat content. 80/20 beef has enough fat to ensure the patties aren't dry, yet not too much that the meal becomes greasy. Most importantly the fat is needed to make the gravy. If you don't have enough fat, the flour will have nothing to combine with, and you will have no base for your gravy... requiring you to add more fat, which defeats the whole purpose of using leaner meat, right?

How do you make hamburger steak

My hamburger steaks are made by combining one pound of ground beef with ⅓ cup of breadcrumbs, a beaten egg, seasoning, and the secret ingredient: A.1. Sauce. Two tablespoons of A.1. Sauce adds a hint of classic steak flavor without taking over the flavor of the dish.

One pound of beef is enough to make six hamburger steaks and are the perfect size to fit in a 12" skillet. After mixing all the ingredients with the meat, separate them into six equal-sized balls and then press them flat into thick patties. The patties are seared in the skillet until a brown crust forms, they will be cooked through completely when adding them to the gravy.

How to make the onion gravy

The onion gravy is made in three steps. Once the hamburger steaks are seared and removed from the skillet add thinly sliced onions to the fat still in the pan and gently saute until the onions are tender, approximately 10 minutes.

Once the onions are tender sprinkle in two tablespoons of flour and mix with the onion. Keep the heat on medium-low to prevent the flour from burning and keep mixing everything around for a minute or two so the raw taste of the flour cooks out.

Finally, the beef broth can slowly be added in. Add it a few splashes at a time to ensure everything fully incorporates, and keep mixing. Lumps will form in your gravy if you go too fast and don't mix it in. Once the liquid has been added the hamburger steaks can be returned to the skillet and cooked with the gravy until the gravy thickens and the steaks are cooked through. 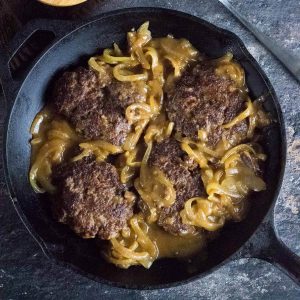 Feel free to add a sprig of thyme to the gravy for added flavor!   IF YOU LIKED THIS RECIPE you will also love my classic meatloaf recipe.