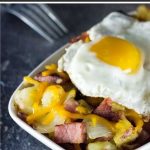 This ham and potato hash is loaded with tender Yukon gold potatoes, sauteed onion, seared ham, and topped with a fried egg. This dish makes a wonderfully hearty breakfast or brunch.

Ingredients for this recipe

How to make a hash

Boiling will soften the potatoes while finishing them in the skillet will crisp the exterior for better texture. This also gives you time to cook the ham and onion prior to adding the potato. Once the hash is cooked, top with a handful of cheddar and a fried egg.

Ways to customize it

My favorite thing about a hash is how flexible it is to accommodate any ingredients you have on hand. Peppers, in particular, are my favorite addition to any hash. Add sweet peppers for flavor, or your favorite spicy pepper for a punch. A sprinkling of chopped green onion can add herbal freshness while fortifying the onion flavor.

You can even swap out the potato to whatever your favorite is, Russets, Yukons, reds, and sweet potatoes all work well in a hash. Finally, feel free to get creative with your cheese. Gouda, pepperjack, and provolone would all work well too!

Check out these breakfast hashes as well! 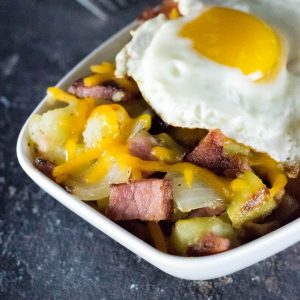