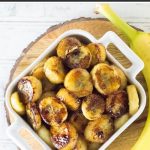 Learn how to caramelize bananas to create a deliciously seared and perfect sweet topping for ice cream, or to enjoy on their own. This would make a phenomenal addition to my banana pudding cheesecake.

What are caramelized bananas?

Caramelized bananas are ripened bananas cooked in a mixture of butter and sugar until browned and lacquered in a sweet and sticky coating.

Melt the butter and sugar together in a large skillet. It is important to set it to medium high heat to get proper caramelization on the bananas. Low heat will cook the bananas without browning, just making them soft and mushy.

Add the bananas to the skillet and gently toss in the butter mixture, then let the bananas sit to brown. Once the bottom has been caramelized, flip them and do the same with the other side. Finally, sprinkle with cinnamon and serve once both sides are caramelized.

What to do with caramelized bananas

Although they can be enjoyed on their own, they are even better when paired with a friend. Use caramelized bananas as an ice cream topping, on waffles, pie, or pancakes. 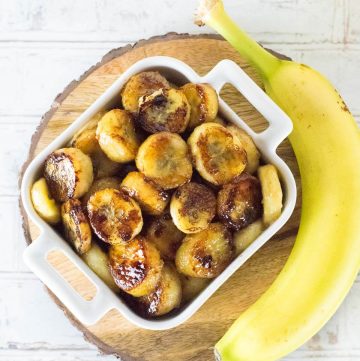 How to Caramelize Bananas

Pumpkin spice can be used instead of cinnamon if desired.