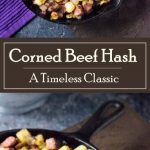 Corned Beef Hash has been around since the Grand Canyon was just a ditch. Though, unfortunately, most people associate it with the grotesque canned gruel found in every supermart. However, making quality homemade Corned Beef Hash requires little more effort than making your favorite breakfast hash browns.

What is Corned Beef Hash

Corned Beef Hash is a classic Irish dish featuring cubed potatoes, corned beef, and onion that many people enjoy around St Patty's Day. However, the British are actually responsible for inventing corned beef in the 17th century, and additionally, the British are even responsible for introducing potatoes to Ireland. It wouldn't take much to credit the British for this classic dish, but the Irish certainly perfected corned beef after its introduction, and we all know how important potatoes were to Ireland. Let's call it a joint effort.

Yukon Gold potatoes are best for Corned Beef Hash. In preparation for the recipe, I tried cubed Yukons, cubed Russets, and shredded Russets. The Yukon Gold potatoes held up best without falling apart or becoming mushy. Red potatoes will likely work equally well if you have them on hand.

How to Make Corned Beef Hash

When making corned beef hash from scratch you will need to have cooked corned beef on hand. I gave the canned stuff a try and it has all of the taste and texture you would expect from a quality can of cat food. You are better off buying a corned beef brisket and cooking it in advance to use for this dish. Any leftovers you have can be used to make the best Reuben Sandwiches you've ever tried!

When making the hash you want to have the potatoes already cooked, or at least par-cooked. If the potatoes are raw when they hit the skillet the corned beef and onions will be burnt to a crisp by the time the potatoes are cooked through. Boiling the potatoes in advance is the easiest way to prepare them, however, there is no reason why you can't bake them instead.

I recommend using a 12" non-stick skillet for this recipe. The ingredients will be crowded in a smaller pan. 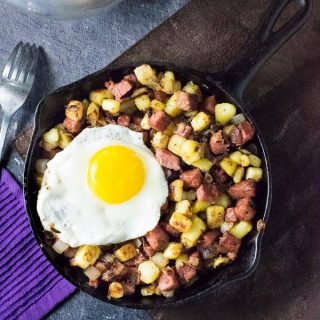 IF YOU LIKED THIS RECIPE you will love my Reuben Sandwich recipe too!

If you enjoyed reading about my Corned Beef Hash recipe then you should probably like me on Facebook and follow me on Pinterest too. That’s what I would do at least, because if you don’t get to know me but you still use my recipe it is kind of like taking candy from a stranger, and your mom taught you not to do that. Don’t disobey your mom, subscribe to Fox Valley Foodie today.