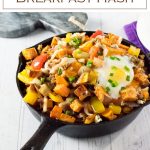 This hearty sweet potato breakfast hash is loaded with tender sweet potatoes, breakfast sausage, peppers, and onions. Finish it off with eggs dotted throughout and a dusting of pepper jack cheese.

The greatest culinary travesty of all time is that generations have been raised believing the only way to enjoy sweet potatoes is topped with ghastly marshmallows at holiday meals. I am ashamed to say I was well into adulthood before I sampled a sweet potato dish prepared any other way. Now that I have seen the light, I am making up for lost time with meals like this sweet potato breakfast hash.

Breakfast hash is a classic American staple, but it typically featuring russet potatoes. My recipe substitutes creamy sweet potatoes instead, for a flavorful twist.

Sweet potato breakfast hash is piled high with crumbled breakfast sausage, sauteed peppers, and onions. The dish is finished with a sprinkling of cheese and eggs intermingled throughout.

Oftentimes when making a hash, everything is cooked in a skillet on the stovetop. This does not work as well with sweet potatoes, which are considerably harder than traditional potatoes. I find it is best to roast the sweet potatoes in the oven and then combine it in a large 12" skillet (affiliate link) with the other ingredients.

You have a little flexibility with how you wish to cook the eggs for the sweet potato hash. I create wells in the hash and drop the eggs in the hole to cook, and then cover the skillet with a lid. However, not everyone has a 12" skillet cover (affiliate link) in their kitchen.

Alternatively, you can stick the whole skillet in the oven to bake the eggs, or you can simply make over-easy or sunny-side-up eggs in a separate skillet and place them over the top of your hash. If you really want it to be easy, just scramble eggs into the hash.

How to Customize this Sweet Potato Breakfast Hash

One of the easiest ways to customize this recipe is to change the protein. Rather than using crumbled breakfast sausage, you can use sausage links, bacon, or even chorizo for a Mexican flare, such as with my chorizo and sweet potato hash recipe.

Rather than using sweet peppers you can turn up the heat with poblano, or jalapeno. Serrano peppers would be great too, but that is starting to get a little too spicy for the average person.

If you have a craving for more skillet dishes, check out my red potato breakfast hash with smoked gouda, or the classic corned beef hash. Otherwise, you can always make homemade hash browns or sweet potato hash browns and use them for the base of your own custom hash. 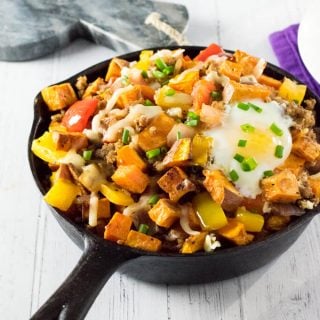 IF YOU LIKED THIS RECIPE you will also love my Southern Fried Potatoes recipe as well!