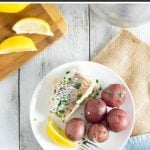 The Door County fish boil is the Midwest's version of the classic crab boil, featuring boiled whitefish and potatoes in a large pot of salted water.

The Door County fish boil is known far and wide as a dish, a destination, and an event.  But you don't have to drive all the way to Door County, Wisconsin to enjoy it.  A fish boil done right at home on your stovetop is also delicious, and it really couldn't be easier.

What is a fish boil?

Door County is Wisconsin's version of the Hamptons, except with friendly down-to-earth people who, instead of duck flambe and an amuse-bouche, happily serve you boiled whitefish with a couple of red potatoes.  But hey, it's delicious.  And it's Wisconsin.  And we love it.

The traditional Door County fish boil is made outside in huge pots bubbling over a large open fire and served to large groups. Potatoes and onions are boiled in a large pot of salted water until tender, then Lake Michigan whitefish is added to the pot and briefly boiled until cooked through. Then the show really starts!

A true fish boil is finished when the chef, or boil master, pours kerosene on the wood fire, causing it to flare up and ignite the fish oils bubbling on the surface of the pot. Once it burns off it is time to eat!

The culinary tradition of the first Door County fish boil began in the 1800s by Scandinavian immigrants who settled on the Door County peninsula. Needless to say, the dish didn't begin as a tourist attraction, instead, it was simply an easy way to feed the large number of lumbermen working in the area forests.

It wasn't until around the 1960s that the traditional fish boil, as we know it, became a popular tourist attraction at The Viking in Ellison Bay and The White Gull Inn located in Fish Creek, respectively. Fish boils have now sprung up across the county as popular tourist destinations, as well as for weddings, graduations, and other community gatherings.

This homemade fish boil recipe serves two people. However, you can easily double the recipe if needed. If doubling, you don't have to double the water, salt, or crab seasonings.

Begin the cooking process by filling a large pot with a gallon of water along with half of the salt, and bring to a boil.  Add the small red potatoes, onion, and crab boil seasoning to the boiling water.

Let the pot boil for 20-30 minutes, or until the potatoes are soft. Then add the whitefish steaks along with the remaining half cup of salt to the boiling pot.  Whitefish will cook quickly, so start checking the fish after the first few minutes.

When the fish is done, drain water in a colander and return potatoes and fish to the pot. The onion and seasoning can be discarded (or you can choose to serve the onion). Add melted butter and the juice of one lemon to the pot and gently stir to coat.

What to serve with a fish boil?

This simple seafood dish is best served with a few simple sides. I recommend the following with your fish boil dinner: 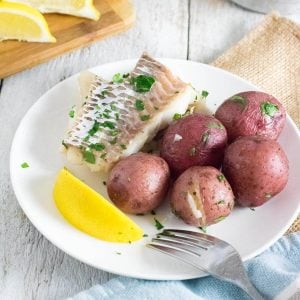 Crab boil seasoning is not a traditional ingredient in classic fish boils, but it does improve the overall flavor, which is why I use it in my recipe. It is best to keep the seasonings wrapped in cheesecloth or a tea infuser to prevent them from clinging to the cooked fish and potatoes. For a more traditional recipe, leave out the crab boil seasoning.

This recipe was originally published January 27, 2015, on FoxValleyFoodie.com.

« Shrimp Scampi without Wine
Smoked Corn on the Cob »