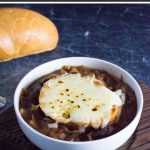 If you like the classic version, you are going to love this hearty French onion soup with beef, topped with a toasted baguette loaded with gooey cheese, of course! This hearty soup is made the same way as traditional French onion soup, but with the notable addition of beef stew meat which is simmered until it renders into wonderfully tender morsels that melt in your mouth.

Classic French onion soup is made by slowly caramelizing onions and then simmering them in a broth commonly flavored with beef stock and dry white wine. Although, there are variations of French Onion soup without wine as well. The best French onion soup is served topped with a slice of toast covered in melted Gruyere cheese. However, my version takes this flavorful soup one step further by adding beef stew meat, to transform it into a French onion beef stew essentially.

The first step of this French onion soup recipe with beef begins by searing off the beef. Add cooking oil to a large pot (or large Dutch oven) and set it over medium-high heat, then add your stew meat in a single layer. Brown the meat on all sides, then remove it from the pot. There will be burnt on brown bits stuck to the bottom of the pot which you should deglaze by adding a splash of beef broth to the pot and scraping at them with a wooden spoon. The burnt on fond will incorporate into the liquid which can then be poured off into a separate bowl with the stew meat.

Next, the stovetop should be reduced to medium heat and the butter can be added to the pot. Once melted, add sliced onions, sugar, and salt. The onions need to be slowly carmelized for approximately 30 minutes, or until they are golden brown. This process cannot be rushed or you will miss out on a lot of rich flavor.

When the onions are nicely caramelized and golden brown, add the minced garlic cloves and cook for another two minutes. Then stir in the flour and cook for a minute or two longer. Stir occasionally throughout this process.

The beef and liquid from deglazing can be added back to the pot along with the remaining beef stock, wine, Worcestershire sauce, bay leaf, and black pepper. Cover the soup pot with a lid, reduce the heat to medium-low heat, and let the soup simmer for two hours.

Serve the beefy French onion soup in ovenproof bowls or soup crocks topped with a slice of toasted French bread covered in shredded cheese. Place the bowl under the broiler until the cheese has melted, then serve. Just be careful not to burn yourself with the hot bowls!

Can French Onion Soup be made in the Slow Cooker?

French onion soup is a poor choice to make in the slow cooker. You will be unable to sear the beef or caramelize the onions in your crockpot. Attempting to do so will result in a big loss of flavor. For best results, the only suitable way to use your slow cooker for this recipe is to first brown the meat and caramelize the onions on the stovetop and then transfer everything to a crockpot. However, at that point, it would likely be easier to just keep it in your soup pot.

How to store leftovers

Your leftover beefy French onion soup should be stored in an airtight container in your refrigerator and enjoyed within five days. This soup reheats well in the microwave, or you can bring it back to temperature in a saucepan on the stovetop. 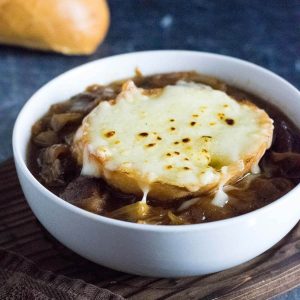