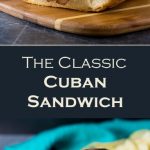 The classic Cuban Sandwich is a staple at sandwich shops all across the country and can easily be prepared in your own kitchen.

You know what always makes me laugh? Neighborhood Watch signs. Sunday afternoon I stopped at my sister's house wearing camouflage and carrying an ax. When no one answered the door I let myself in while her neighbors went about their business without a concern. I think she needs to move to a more vigilant neighborhood.

In case you were wondering why I would break into a house in full camo with an ax in hand, it was because I decided to return my brother in law's ax on my way out to go hunting. See, that is way less creepy, right? I spent the full day wandering around the woods working up a ferocious appetite for a hot and melty Cuban sandwich!

The classic Cuban Sandwich has been a favorite of mine as long as I can remember. Loaded with savory roast pork, sweet ham, melted Swiss cheese, and tangy pickles and mustard, it is a phenomenal combination.

Making these in your own home is simple because you can buy all of the ingredients already made. Admittedly, many people recommend using traditional Cuban roasted pork, but any grocery store deli will sell traditional roast pork that works just as well for the average home cook.

The thing that trips up the most people when making a Cuban sandwich, is the bread. Around most parts of the country getting your hands on Cuban bread is nearly impossible. You can substitute French or Italian bread instead. I like French bread as long as it is not mouth-cuttingly crusty. I have also seen people use hoagie buns with success.

How to Make a Cuban Sandwich

The secret to the best Cuban sandwiches is grilling them of course. The easiest way to do this is with a panini press, however, I don't own one and I suspect most of you don't either. Instead, you can use a traditional skillet and press the sandwich down with a heavy object such as a cast iron pan. Flattening the sandwich helps ensure it gets heated through.

What to serve with Cuban Sandwiches?

If you are looking for a side dish to serve with these phenomenal sandwiches, give any of these ideas a try: 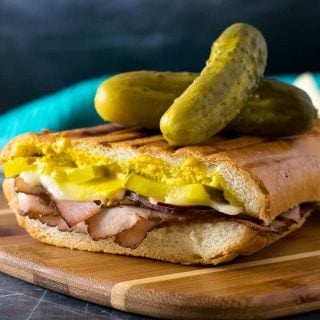 Don't overthink this recipe. Loaves sizes vary so adjust the ingredients amounts as needed.   IF  YOU LIKED THIS RECIPE you will love my Crock Pot Mississippi Crack Chicken Sandwiches recipe too!