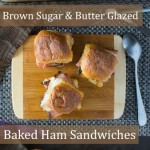 These baked ham and cheese sliders are a big hit at any holiday gathering or game day party. Otherwise, they are also perfect to make with leftover ham!

Ingredients You Will Need

Prepare your baked ham sandwiches by first slicing the Hawaiian sweet rolls in half with a large serrated knife and placing the bottom halves in a small baking dish. Pile two slices of ham on each roll, then add slices of cheese and the top half of the rolls.

Prepare the glaze mixture by mixing together melted butter, brown sugar, Dijon, Worcestershire, and onion powder in a small bowl. Drizzle sauce evenly over the top of the mini sandwich rolls so everything is fully coated, then cover with foil and place in the refrigerator for two hours to set.

After two hours, remove from the fridge. Heat oven to 375 degrees and place the sliders in the oven for 20 minutes while still covered with foil. Then remove the foil and bake for an additional 10 minutes. Now the delicious ham and cheese sliders with brown sugar and Dijon mustard are hot, melty, and ready to serve!

Can these be made in advance?

Yes! Baked ham sliders are such a great party meal precisely because they can be made in advance so easily. The day prior to your party, start the Hawaiian roll sliders and follow the direction until the sandwiches are placed in the refrigerator. Then stop.

This is the perfect make-ahead point because the sandwiches can now be left in the refrigerator in a casserole dish covered with plastic wrap or foil until shortly before you wish to serve them. Simply remove from the fridge and bake.

What cheese goes best with ham?

Swiss cheese and Cheddar cheese are the two most popular kinds of cheese for ham sandwiches. For this easy recipe, Swiss plays best with all of the ingredients used.

How do you keep sandwiches warm at a party?

Place the sandwiches in a baking dish covered with foil and set them in the oven at 180 degrees. Remove them from the oven and uncover when you are ready to serve the individual sandwiches.

How much meat goes on a slider?

Sliders are smaller than traditional sandwiches and therefore require fewer fillings. Two ounces of meat is typical per slider. 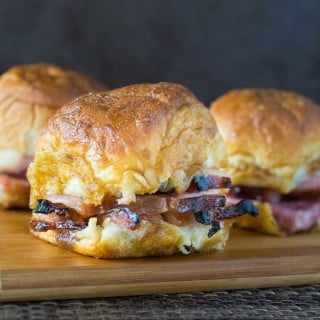 Spiral sliced is the best baked ham for sandwiches because the slices are the right thickness and pre-cut! Store leftover sliders in an airtight container in your refrigerator. Leftovers can be enjoyed cold, reheated in the oven, or microwaved.

This recipe was originally published on FoxValleyFoodie.com on November 23, 2015.