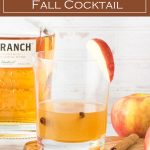 The crisp tartness of apple cider blends perfectly with the deep smokey flavors of bourbon and bitters in this whiskey cider fall cocktail.

I need to humbly tell you, this is the greatest fall cocktail I have ever had the privilege to sip. If Chuck Norris was a cocktail, he would no doubt be this Whiskey Cider because it kicks butt so much. Fun fact: Chuck Norris doesn't get hangovers, alcohol gets Chuck Norris... yeah, that doesn't really make any sense, but most Chuck Norris jokes don't.

There isn't a more "fall" drink than apple cider, so it made sense to feature it in a fall cocktail. You've had hard cider in the past, I'm sure. This fall cocktail packs a little more punch and has a greater depth of flavor. It is perfect for sipping on a chilly evening as you take in the colors of the season.

What Alcohol Goes Well with Cider

Whiskey is a perfect pouring partner for apple cider, but bourbon whiskey, in particular, is phenomenal. Bourbon whiskey features deeper, smokier flavor tones than most other varieties of whiskey which really adds a tantalizing depth of flavor to apple cider.

This whiskey cider is more than a blend of apple cider and bourbon whiskey. Though these are the two primary ingredients, they are both highlighted with an additional ingredient to enhance their flavor. A dash a bitters adds greater depth to the bourbon in your glass, and a small squeeze of lemon adds a tart crispness to the cider. I recommend only using a wedge of ⅛ of a lemon. You don't need a lot of lemon juice, just enough to brighten the flavor.

Store bought apple cider works well in this cocktail, however, if you really want to go all out, check out my Homemade Apple Cider recipe.

How to Prevent Hangovers

Sometimes it is a little too easy to drink more booze than you were planning, and before you know it, the next day is ruined with a hangover. About a year or so ago I discovered this hangover prevention drink that works miraculously well. Actually, you can even use it while hungover as a recovery drink. It won't help you with the lack of sleep associated with drinking, but it can completely eliminate the pounding headaches and other pains associated with hangovers. I am not paid by the company to promote this product, I simply am doing so because it works. Seriously, check it out. 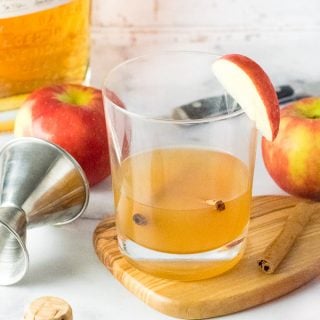 I prefer to craft this cocktail with chilled apple cider, however, it would likely taste fantastic warmed as well!    IF YOU LIKED THIS RECIPE be sure to check out my Blackberry Bourbon Lemonade recipe too!

If you enjoyed reading my Whiskey Cider recipe then you should probably like me on Facebook and follow me on Pinterest too. That’s what I would do at least, because if you don’t get to know me but you still use my recipe it is kind of like taking candy from a stranger, and your mom taught you not to do that. Don’t disobey your mom, subscribe to Fox Valley Foodie today!