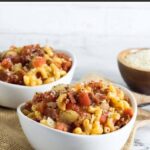 Macaroni and tomatoes is an inexpensive recipe that was popular in simpler times, yet is still enjoyed by many.

I love this recipe, not only because I am a sucker for reviving old-fashioned recipes, but also because of how flexible it is. The only rules to this simple dish are tomatoes and macaroni noodles need to be used, beyond that the home chef can get creative with how they want to dress up this recipe with whatever pantry staples they have on hand.

As the name implies, the primary ingredients in this easy recipe are macaroni and tomatoes. This humble meal was particularly popular in households where money was tight. Tomatoes and pasta were inexpensive, and when thrown together with a little bacon fat, a cheap and easy meal can be served.

This simple meal was most commonly known as a classic southern dish but it was also a popular staple in poor households throughout the Midwest as well. Bacon was often used as an ingredient because it was cheaper than most meat, and packs a lot of flavor. However, in households like my grandma's, hot dogs were commonly added instead because they were even cheaper.

Begin making this old fashioned macaroni and tomatoes recipe by boiling the macaroni noodles in a large pot of salted water on the stove top until al dente. When the noodles are tender, drain from the water and set aside.

Tip: Toss the noodles in a little cooking oil to prevent them from sticking after they finish cooking.

In a separate large frying pan, add your bacon and cook it over medium high heat until crisp. Crumble the bacon once it is cool enough to handle. Reserve one tablespoon of bacon grease in the skillet and add the chopped onion. Saute the onions over medium heat until tender.

Once the onions are tender, pour in the diced tomatoes and the tomato juice from the can. Add sugar, salt, and pepper, and bring the mixture to a boil. Let it cook until most of the liquid has evaporated, then add the cooked pasta and crumbled bacon. Toss everything together and serve when everything is warmed through.

This is a great recipe to customize with your favorite flavors. If you want inspiration, try any of these ideas:

Leftovers macaroni and tomatoes should be refrigerated in an airtight container and enjoyed within five days. This can easily be reheated in the microwave in individual servings. Please note, the noodles will likely absorb any excess liquid in the sauce as it refrigerates and the bacon will also soften. 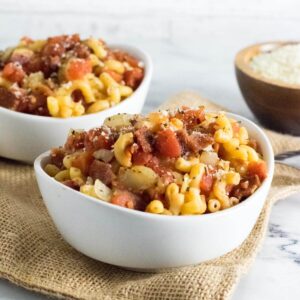 Grated parmesan cheese makes a great topping if desired. Historically, a little sugar was added to this recipe to further sweeten the tomatoes. For authenticity, I included it in my recipe as well, however, it is largely unnecessary in my opinion.