Rattlesnake pasta is a deliciously spicy pasta dish loaded with penne pasta, sauteed chicken, and jalapenos swimming in a creamy sauce. I love this recipe for when the urge hits to kick family dinners up a notch on busy weeknights or for a special occasion. This rattlesnake pasta recipe is comfort food for the heat seaker.

Rattlesnake pasta is a popular pasta entree served at restaurants such as J. Alexander and 54th Street Grill, among others. The spicy alfredo sauce-based pasta dish is famous for being loaded with Cajun spices jalapeno peppers, and sauteed chicken breast.

My easy rattlesnake pasta recipe uses my roux-based alfredo sauce without heavy cream recipe and kicks it up with a dollop of Dijon mustard and crushed red peppers. This creamy sauce is perfect for soaking in the heat of the peppers and seasonings.

Your homemade rattlesnake pasta is made in three easy steps. First, boil your pasta in a pot of salted water until it is al dente. Once it is finished, toss it in olive oil to prevent clumping and set it aside.

While the pasta is boiling you want to saute the chicken pieces with olive oil in a separate saute pan or large skillet. Saute the chicken until it is fully cooked, then remove it from the skillet and set aside. Next, do the same with the peppers, onions, and garlic. Cook the vegetables in additional olive oil until the onions are tender and the peppers are tender-crisp then set them aside with the chicken.

The final step is to prepare your rattlesnake sauce. Melt butter in the saute pan reduced to medium-low heat and sprinkle in the flour. Whisk the flour into the butter and continue whisking to prevent it from burning. After three minutes start adding the milk to form a sauce. Once all of the milk has been added you can stir in the cheese in batches.

Finally, add the Dijon, crushed red peppers, salt, and black pepper to the alfredo mixture. Simmer the sauce for a couple of minutes to thicken slightly. Add the cooked pasta, chicken, and sauteed vegetables to the sauce. Once everything is heated serve immediately.

How to store it

Your rattlesnake pasta should be stored in an airtight container in your refrigerator and eaten within five days. It is best to reheat this dish in individual servings in your microwave, along with a small splash of milk to rehydrate the sauce. Otherwise, the pasta soaks in the liquid as it sits in your refrigerator, resulting in less creamy leftovers. 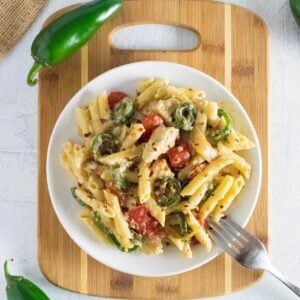 If your pasta finishes boiling before the rest of the dish is ready toss it with some olive oil to prevent clumping as it sits.