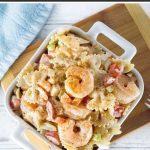 This creamy Cajun shrimp pasta salad is spiked with bold flavors of the bayou, tender shrimp, and crisp peppers, onions, and celery.

If you are craving a new twist on the pasta salad scene, jazz up your next potluck with the flavors of Louisiana. The pasta salad is creamy with just the right amount of heat, and is packed with cajun flavors.

What is the cajun holy trinity

You will notice this recipe calls for onion, celery, and pepper. These three vegetables make up what is known as the holy trinity of cajun cuisine. They are practically a requirement is all Cajun recipes, so it would be remiss not include them here.

How to make this pasta salad

Heat the water and boil your noodles as you prep your ingredients. Once the noodles are al dente rinse them under cold water to stop the cooking process and cool them down.

The pasta salad is really easy to assemble, as everything just gets mixed together in a large bowl. I find it is easiest to mix the sauce ingredients first, then fold in the vegetables, shrimp, and noodles.

Can this be made in advance?

You can make the Cajun shrimp pasta salad a day in advance if desired. Pasta salads don't always do well when made too far in advance because the noodles will soak up any excess liquid, becoming mushy and removing much of the dish's creaminess. However, this recipe did fairly well the next day when I tested it.

Cherry tomatoes would make a bright addition to this salad, but that is more typically found in creole cuisine. Still, I doubt any of your picnic guests would care. You could also add cooked andouille sausage instead of shrimp, or along with it. Finally, a little pickled okra could add some punch to the flavor as well. 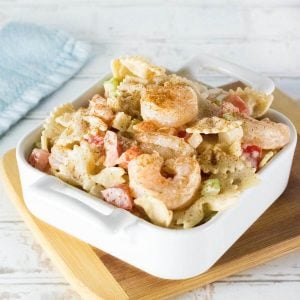 It is important to use salt-free Cajun seasoning to prevent this from becoming too salty. I recommend substituting my Creole seasoning recipe if needed since it has similar flavors and no salt.