This recipe for Cajun shrimp and sausage pasta is loaded with your favorite New Orleans flavors over a bed of creamy pasta coated in a boldly seasoned sauce. This easy weeknight dinner packs just the right amount of kick and is sure to add some excitement to your dinner table.

This Cajun shrimp and sausage pasta recipe is made in chunks. First, the meat is cooked and seared, then the vegetables are sauteed, followed by the sauce and noodles being prepared. Finally, everything gets combined and served. It is pretty straightforward, so let's get started!

Add the sliced andouille in a single layer to a large saute pan set over medium high heat. The sausage should have enough fat that you shouldn't need any olive oil to sear it, but you can add some if needed. When the sausage has almost finished searing add the shrimp and cook through. The sausage and shrimp can then be set aside.

Note: You can also use a large skillet, but a saute pan is ideal because of its tall sides.

Reduce the heat to medium and add the peppers and onion to the saute pan along with a tablespoon of olive oil. Cook until the vegetables are tender and beginning to brown, then add the garlic and cook for an additional two minutes. Your vegetable mixture can also be set aside with the sausage and shrimp.

Get your noodles boiling in a large pot of water and cook according to the package instructions while you work on the sauce separately.

To prepare the Cajun sauce, add chicken broth, heavy cream, cajun seasoning, and a sprig of thyme to the skillet and scrape up any burnt-on bits on the bottom of the pan with a wooden spoon to allow them to incorporate into the sauce. Reduce the heat to a simmer and let cook for 10 minutes, or until thickened. Finally, remove the saute pan from the heat and stir in the Parmesan cheese, then add sausage, shrimp, vegetables, and cooked pasta noodles to the pan and toss to combine. Serve immediately.

If you like spicy pasta dishes, try my Rattlesnake pasta recipe too!

Leftovers of your Cajun pasta recipe should be stored in an airtight container in your refrigerator and enjoyed within five days. It is best to reheat meals in individual servings in the microwave until heated through. The sauce will soak into the noodles as it sits in the refrigerator, so don't expect the leftovers to be as creamy as the original meal. 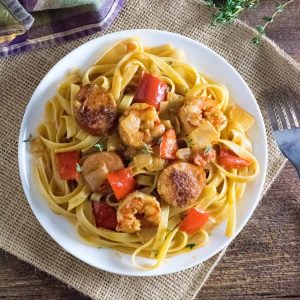