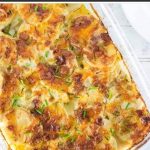 Loaded scalloped potatoes is a decadent twist on the traditional side dish, loaded with creamy potatoes, smoky bacon, and a crispy cheese crust. Yep, that's right, no creamy cheese bites here, we burn the cheese to perfection!

What are scalloped potatoes?

Scalloped potatoes are similar to Au Gratin Potatoes, but au gratin potatoes feature more cheese. Admittedly, there are recipes commonly found for scalloped potatoes that also include cheese, including my own. However, I would define au gratin dishes as being the heaviest on cheese.

Ingredients for my loaded scalloped potatoes

First, you will need to prep your ingredients, which includes crisping your bacon and thinly slicing the potatoes. The easiest way to slice your potatoes quickly and evenly is to use a mandoline. You won't use it every day in your kitchen, but when you need it it is a lifesaver!

You need to create a roux for the sauce. A roux is a combination of fat and flour that is cooked together. You can use butter, if desired, as that is typically my first choice. However, since we just cooked up 12 ounces of bacon, you can just use the bacon fat instead. It works just as well and adds a smoky bacon flavor throughout!

The roux is cooked by whisking the flour and bacon grease in a large skillet over medium-low heat until the raw flour taste is removed. This only takes a couple minutes. Then the milk can be added. However, it is important to only add it a few splashes at a time to ensure it incorporates evenly.

I recommend using the warmed sauce to temper the sour cream prior to adding it so it doesn't curdle. Place the sour cream in a bowl, and ladle hot sauce into it while stirring together. Once the sour cream is warm, combine it all with the sauce. Finally, add the bacon, cheese, and chives and add it to a large bowl to coat the potatoes.

Pour the whole mixture into a 9x13 baking dish and bake covered in foil at 350 degrees for 30 minutes, then uncovered for 45 minutes to allow a crust to form. Let cool for 5-10 minutes then serve.

How to reheat this dish

You can reheat individual portions in your microwave easy enough, but if you are reheating a larger serving it is best to use your oven. Recover the potatoes in foil and bake in your oven for about 35 minutes at 350 degrees, or until warmed through. 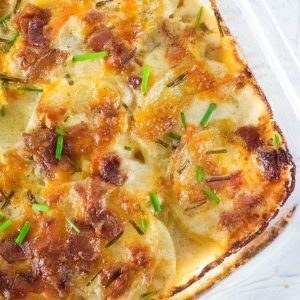