Jambalaya soup is a savory twist on the classic creole dish, loaded with all the flavors of New Orleans you love!

Jambalaya has long been one of my favorite creole creations, and a dish I have enjoyed making for years. However, it wasn't until just recently that I thought about transforming it into a soup when my buddy Nate suggested the idea. My hat's off to him because I enjoy this soup as much as the original creation!

This recipe is the soup version of my authentic jambalaya recipe. Loaded with the same flavors, I have adjusted the ingredient quantities to be more fitting for a soup. Specifically, a large amount of chicken stock is added to form the base of the soup broth, and I increased the quantity of vegetables called for to fill in the larger volume of the soup.

What Meat for Jambalaya Soup

This recipe calls for one pound of andouille sausage, and one pound of shrimp. However, chicken is another common ingredient that can be added. Add chicken as a substitution for either the shrimp or sausage or include it in addition to the other two proteins.

Tip: Chicken breast is commonly used, however, I like to use boneless skinless chicken thighs in soups and stews because they stand up to overcooking better without drying out.

My jambalaya soup is creole inspired. Creole food traditionally has been 'city food' which had access to a greater number of ingredients, such as tomatoes, which are used in my recipe. In modern cooking, cajun and creole seasoning can typically be substituted as the differences are subtle, but I do have an easy homemade creole seasoning recipe you can keep on hand for any of your favorite dishes.

How to Make Jambalaya Soup

The key to packing as much flavor as possible into this soup is creating layers of flavor. We accomplish this by first browning the sliced sausage in the pot, then sauteing the vegetables in the rendered fat before the remaining soup ingredients are added.

There isn't a need for a long simmer with this soup. The rice will thicken the soup by soaking up a lot of liquid as it cooks. Expect the rice to take 15-18 minutes to soften, and add the shrimp in the final 5 minutes of cooking.

Can this Recipe be Made in Advance?

Jambalaya soup tastes best when served immediately. Leftovers can be stored in the refrigerator and reheated later, but the texture of the soup suffers. The rice continues to absorb liquid and become mushier and the sausage softens as well. Despite this, I still enjoy eating this soup for days. 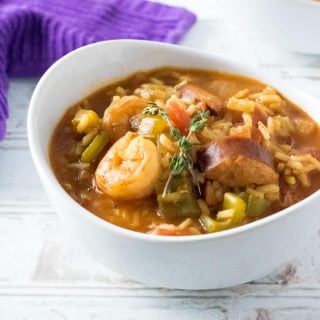 Jambalaya soup is a savory twist on the classic creole dish, loaded with all the flavors of New Orleans you love!

IF YOU LIKED THIS RECIPE you will also want to try my Gumbo from Scratch and authentic Red Beans and Rice recipes!