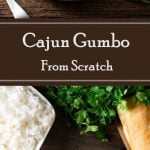 If you want to make Gumbo from scratch, this recipe will compete with the best on Bourbon street! Using a gumbo roux and okra for thickening, this hearty stew will give you a taste of the Big Easy!

I've been making gumbo from scratch since I first learned how to cook. For whatever reason, I have always been enamored by creole and cajun cuisine. Once I even planned a road trip down to New Orleans just to enjoy all of the great food, but the week before I left I got a notice from the IRS saying they adjusted my tax return by $1000. Needless to say, it wasn't in my favor.

Someday I will make it down to Bourbon street, but in the meantime, my kitchen can whip out food just as good as any restaurant in the Big Easy. I've been tweaking my Red Beans and Rice, Jamabalya, and Gumbo recipes for years. Oh, and not to mention, my homemade creole seasoning recipe.

Gumbo is a traditional Lousiana stew served with rice. To make a gumbo from scratch you need to understand how to thicken it properly. After all, who wants to eat a runny gumbo? Traditionally gumbo is thickened with file powder, okra, or a gumbo roux. Personally, I find it is easiest to thicken with okra or a roux. My recipe calls for both.

Okra is a great natural thickener because its slimy nature actually has powerful thickening properties, plus the chunky vegetable adds great texture and flavor to the stew.

To thicken a gumbo with a roux isn't difficult, however, it takes more attention as you don't want it to burn. Basically, a roux is a mixture of equal parts flour and fat that is cooked together prior to incorporating into a stew.  The fat can be butter, oil, lard, or even bacon grease. It is used so frequently in cajun cooking it is often referred to as "Cajun Napalm".

A roux can be blond colored, or cooked until a deep brown. The more it is cooked, an increasingly nuttier flavor is imparted. However, if you wish to create a lightly colored roux you still need to make sure you heat it long enough to cook out the raw flour taste. I heat my roux for a minimum of 5 minutes every time.

Finally, it is very important you pay close attention to the roux as it cooks. You need to whisk continually so it doesn't burn. If the roux burns you need to dump it out and start the roux again or your Gumbo will have a bitter burnt taste.

Did you know you can buy Gumbo Roux? Personally I recommend making it, however, it is a nice shortcut if you are looking for one.

To make a good Gumbo from scratch you need to know the Holy Trinity. No, not the Father, Son,  and Holy Ghost. Though they are important too, I am actually referring to onions, celery, and peppers. This is a staple in cajun cuisine. You can't make traditional gumbo without it.

Next, you get to choose your protein. This Gumbo recipe calls for chicken, andouille sausage, and shrimp. However, you can use any combination of these with great results. I often make a chicken and sausage gumbo instead. If you aren't familiar with it, Andouille sausage is a popular smoked pork sausage in Louisiana, however, you can find it at grocery stores around the country. Like much of cajun cuisine, Andouille sausage has it roots in French cooking. 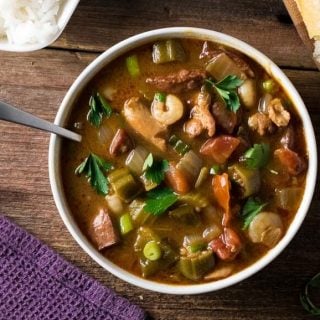 Gumbo from Scratch with a Gumbo Roux

If you want to make Gumbo from scratch, this recipe will compete with the best on Bourbon street! Using a gumbo roux and okra for thickening, this hearty stew will give you a taste of the Big Easy!
4.23 from 9 votes
Print Pin Rate
Course: Entree
Cuisine: American
Prep Time: 10 minutes
Cook Time: 2 hours
Total Time: 2 hours 10 minutes
Servings: 8
Calories: 435kcal
Author: Fox Valley Foodie

IF YOU LIKED THIS RECIPE you will love my authentic Red Beans and Rice,

If you enjoyed reading my Gumbo from Scratch recipe then you should probably like me on Facebook and follow me on Pinterest too. That’s what I would do at least, because if you don’t get to know me but you still use my recipe it is kind of like taking candy from a stranger, and your mom taught you not to do that. Don’t disobey your mom, subscribe to Fox Valley Foodie today.