This one-pot Chicken and Sausage Jambalaya is an authentic Creole Jambalaya recipe loaded with tender chicken, andouille sausage, and all of the bold flavors of Mardi Gras!

One year ago right now I was taking it easy in the Big Easy, sipping on a beer while listening to some live Dixieland jazz, and working up the courage to wrestle an alligator. In the end, I decided not to wrestle the alligator because I just ate a bunch of Jambalaya and figured I should wait 30 minutes before going back in the water. I wouldn't want to risk getting a cramp, you know.

Though Cajun and Creole dishes rank as some of my favorites foods, I don't wait for return trips to New Orleans to enjoy them. Some of my most practiced recipes are Big Easy classics such as my Red Beans and Rice, and Gumbo recipes. I spent an equal amount of time perfecting this Chicken and Sausage Jambalaya recipe.

What is Authentic Jambalaya

Jambalaya is a classic Cajun and Creole one-pot rice dish found in New Orleans and surrounding communities. Though the recipe will vary depending on how your mother cooked it, and where you live, traditionally this heavily seasoned dish contains rice, meats such as chicken, andouille sausage, and/or shrimp, as well as the quintessential holy trinity of cooking: onion, bell pepper, and celery.

The primary difference between Creole Jambalaya and Cajun Jambalaya is the addition of tomatoes. Creole food was typically associated with city living and used more ingredients that they had available and could afford. Cajun food is country food, which was often more simplistic. My Chicken and Sausage Jambalaya recipe is an authentic Creole Jambalaya crafted with my homemade creole seasoning.

Chicken and Sausage are two of the most popular meat additions to Jambalaya. Andouille is the best sausage for jambalaya, however, if you are averse to spicy food you can substitute smoked sausage instead. I also favor using chicken breast, and I chop it fairly small so it is the same size as the bites of sausage in the dish.

Shrimp is another popular Jambalaya addition. Though I don't call for it in my recipe, if you choose to include it, adding approximately 12 medium shrimp to this recipe would be about right.

How to Make Jambalaya

Jambalaya is a one-pot dish that is actually quite easy to make. For best flavor, it is recommended to brown your meat first. I like using a saute pan for this because the burnt on fond will dissolve into the jambalaya while it cooks, really deepening the flavor.

Once the meat is browned, it can be removed from the pan so the vegetables can saute, then everything is added back in with the rice, liquid, and seasonings and cooked on low until the rice is tender. Jambalaya hack: If you cook at too high of heat and the liquid cooks out before the rice is tender, add a few splashes of water and continue cooking.

If you really want to make easy Jambalaya you can use store bought creole or cajun seasoning rather than using the seasonings called for in my recipe. However, I humbly believe following my recipe is worth it. 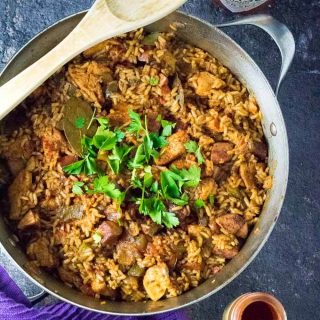 IF YOU LIKED THIS RECIPE check out my easy Instant Pot Red Beans and Rice recipe too!

If you enjoyed reading my Authentic Chicken and Sausage Jambalaya recipe then you should probably like me on Facebook and follow me on Pinterest too. That’s what I would do at least, because if you don’t get to know me but you still use my recipe it is kind of like taking candy from a stranger, and your mom taught you not to do that. Don’t disobey your mom, subscribe to Fox Valley Foodie today.