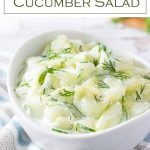 This fresh and tangy German cucumber salad is a classic staple at any Midwestern potluck. Easy to prepare, it is always a crowd pleaser.

My father doesn't do a lot of cooking, but most summers you will find a giant jar of German Cucumber Salad resting in his refrigerator, which he simply refers to as refrigerator pickles. The simplistic nickname is indicative of the commonality of the dish in this region. Popularized by German immigrants settling across Wisconsin and the Midwest, you will still find Gurkensalat commonly served as a refreshing side dish at any summer potluck.

What is German Cucumber Salad (Gurkensalat)

German cucumber salad, traditionally known as Gerkensalat, is a creamy cucumber salad featuring thinly sliced cucumbers swimming in a sour cream dressing spiked with fresh dill. Similar to old-fashioned half sour pickles, this popular summer salad was often prepared simply to make use of the abundance of cucumbers coming from backyard gardens, using only a handful of ingredients.

How to Make It

Cucumbers: Most typically, the best German cucumber salad is made by thinly slicing peeled cucumbers, however, there is no shame in cutting them a bit thicker if desired. Since cucumbers contain so much water, they can be lightly salted and set in a colander to drain the extracted water for a couple of hours prior to being added to the salad. This will prevent the salad from becoming excessively runny, but it is a completely optional step. Be sure to drain them in the sink, or use a large bowl under your colander to catch the excess liquid.

Tip: Using a mandoline slicer makes cutting the cucumbers much quicker and easier. Particularly if you want paper-thin slices.

Dressing: The creamy dressing for Gurkensalat is simple to prepare. Sour cream, vinegar, and flavorings are simply mixed together and tossed with the sliced cucumbers. The flavors will meld together as it rests, so I recommend preparing the dressing as soon as the cucumbers are sliced so it can meld while the salted cucumbers drain.

Combine: Finally, when the cucumbers are done draining, combine the thin cucumber slices with the dill dressing. Gently stir to fully combine. This can be served immediately.

How to Customize This Recipe

This is the perfect salad to customize to fit your own tastes, as there can be many variations of this recipe. Two popular additions to this creamy German cucumber salad include sliced onions and/or garlic. Minced garlic will taste better than garlic powder, but either will work. If you wish to add sliced onion, my personal preference is to use half of a sweet onion, sliced thinly. It has a less aggressive flavor than red onion. Fresh chives are a less common addition that I feel would be well suited for this dish. Finally, spiking the salad with lemon juice brightens the flavor.

Can German Cucumber Salad be prepared in advance?

This dish can certainly be made in advance. My father often prepares a large batch at once and eats it for days. The flavors also meld together nicely as it sits in the refrigerator. However, you can expect the cucumbers to lose some firmness and continue to expel liquid, which will make the sauce runnier. Be sure to store it in an airtight container to protect the flavor. It is best enjoyed within 5 days. 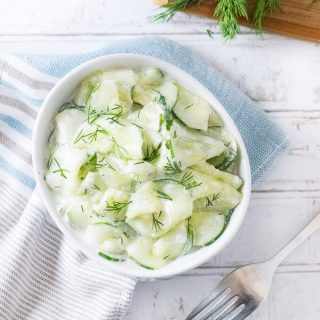 Most people thinly slice the cucumbers, however, you can slice them thicker if desired.