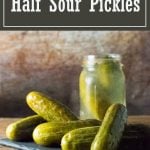 Craft the classic crunch of your favorite deli pickles right in your own home. Making your own half sour pickles is easy and requires minimal ingredients.

We are going old school, ladies and gentlemen! No vinegar, no canning, no cooking. We are fermenting half sour pickles like its 1899. Don't let the word "fermenting" scare you. We are literally just putting pickles in salt water and letting them sit for a week. If your grandma can do it, you can do it. Don't let granny show you up, I hear she's already talking smack.

What are Half Sour Pickles

Half sour pickles are a popular delicatessen pickle that relies on fermentation rather than white vinegar for its classic sour flavor. As they sit in a saltwater solution they begin to ferment, becoming increasingly sour with each day. Half sours are typically done fermenting 1-2 weeks, however, you can let them ferment longer if you wish. It is all about what tastes best to you. Personally, seven days is my sweet spot.

Why Use Pickling Salt

I always use pickling salt when canning or fermenting. There is no iodine in it or anti-caking agents, so it does not discolor the brine or darken the pickles. In a pinch, you can use table salt, but your pickle quality may suffer a bit. Kosher salt doesn't have iodine in it, but the granules are larger, which makes substituting it more difficult.

Why Use Non-Chlorinated Water for Fermenting

It is important to only use non-chlorinated water, such as bottled or filtered water, for fermenting. Additives such as chlorine can alter the fermentation process, or prevent fermentation from starting altogether.

How to Make Crispy Pickles

There are a couple of easy tricks to ensuring your half-sour pickles are crisp as possible. First, I recommend trimming off the blossom end of the fresh cucumbers. The blossom end contains an enzyme that will soften the pickles, trimming 1/16" is all that is needed to get rid of it. Additionally, I also add pickle crisp to my fermentation, though grape leaves work just as well if you can find them. The tannins keep the pickles crunchy as they ferment.

How to Ferment Pickles

Fermenting pickles is quite easy to do. To begin, you need a fermentation vessel. Quart jars work for a small test batch, but half gallon jars are considerably better due to their larger size. If you really want to go all out, get a fermentation crock. These things are a little pricier, but they also come with food safe weights to keep the pickles submerged in the brine, plus they just look really cool.

When fermenting pickles it is important to keep the salt to water ratio of your pickling brine the same as you scale the recipe up and down. Therefore I typically add the salt and water directly to my fermentation vessel and then mix it, instead of mixing the salt brine separately and dividing the mixture into my vessels.

Finally, make sure to keep your cucumbers and garlic submerged in the brine. Exposed produce can mold and ruin your whole batch. You can easily keep everything submerged by placing a food safe weight, such as a cabbage leaf, or wax paper, inside the jar. The brine can still flow above the leaf, but the pickles are pushed down. Keep your pickles in the jar at room temperature, covered loosely with a lid on top of the jar in a cool dark place for 7-10 days, then enjoy!

How to store half sour pickles

When you are satisfied with the fermented flavor of your half-sour pickles they can be placed in the refrigerator to slow the fermentation and preserve their flavor. They should be eaten within two weeks, or they will progress into full sour pickles. Refrigerating them does not completely stop fermentation, it just slows it down. 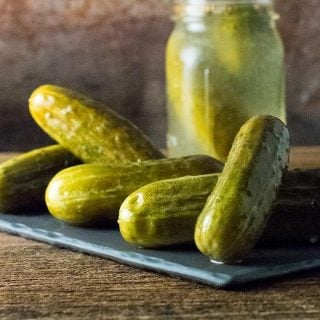 This recipe is meant to be scaled up as needed. Keep the ratio of 2T pickling salt per 1 quart of water.   This recipe works for sour dill pickles as well by adding fresh dill instead of, or in addition to pickling spice.   IF YOU LIKED THIS RECIPE check out how to make homemade fermented sauerkraut too!

This recipe was originally published on FoxValleyFoodie.com on August 3, 2018.