Cozy up to a pot of French Onion Pot Roast on a chilly winter evening. The rich flavors of French onion soup soak into hearty red potatoes and luxuriously tender beef.

I think pot roast is one of the most quintessentially midwestern dishes to ever hit a dutch oven. Its simplicity is its beauty, ingredients are prepared with minimum effort while the low and slow cooking methods creates the magic. While you spend the afternoon counting flowers on the wall, the tough cut of beef slowly melts into a mouthwatering meal.

A traditional pot roast typically features carrots. However, I don't find carrots to be a good flavor companion to French onion soup, which is why they are omitted. Red potatoes, however, are perfectly suited to soak up every delicious drop of flavor-infused juice. Not only is their creamy, mild, flavor a great addition to the pot roast, red potatoes hold up well to long cooking times, unlike traditional baking potatoes.

I really wrestled with whether to chop the onions for this recipe or slice them. Traditionally, French onion soup features sliced onions. However, I decided to chop my onions so they could incorporate into the gravy rather than needing to be scooped up by the forkful. You are welcomed to choose either method.

This is one recipe where a Dutch Oven shines! Using a dutch oven allows the beef to be seared on the stove top and the onions to be caramelized, then the same pot can be placed in the oven while the roast braises. The thick sides allow it to retain heat better and distribute it evenly to prevent scorching.  Could you make this recipe simply by adding the ingredients to a slow cooker? Yes, but you would be missing a ton of flavor. 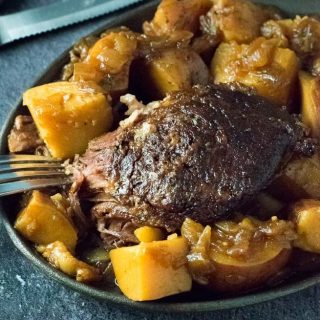 IF YOU LIKED THIS RECIPE you will love my Beer Braised Short Ribs recipe too!

If you enjoyed reading about my French Onion Pot Roast recipe then you should probably like me on Facebook and follow me on Pinterest too. That’s what I would do at least, because if you don’t get to know me but you still use my recipe it is kind of like taking candy from a stranger, and your mom taught you not to do that. Don’t disobey your mom, subscribe to Fox Valley Foodie today.