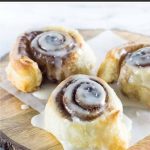 These easy puffy pastry cinnamon rolls are as good as any bakery, but so much simpler to make when using refrigerated puff pastry dough. Even the cinnamon roll icing, which is made from scratch, whips up in seconds!

Cinnamon roll filling is a mixture of butter, brown sugar, and ground cinnamon. The cinnamon adds the flavor, brown sugar makes it sweet, but the butter is the secret ingredient.

The secret to the best cinnamon rolls is to use a generous amount of butter in the filling! The butter combines with the brown sugar and cinnamon and melts during baking, creating the intoxicatingly delicious syrupy filling that is the hallmark of any good cinnamon roll!

The key to combining the filling ingredients well is to soften the butter. This not only mixes better with the brown sugar and cinnamon but spreads easier over the dough. If your butter is too stiff you will tear the dough as you attempt to spread it.

How to make the icing

Don't be intimidated to make homemade icing, it is actually incredibly easy! All you have to do is add the powdered sugar, vanilla extract, milk, and softened butter to a bowl and whisk it together. That is it! You can use a whisk, but a hand mixer works best.

How to get lumps out of icing

I recommend using soften butter, rather than melted butter to make your icing because softened butter will combine with the other ingredients more easily without forming lumps. Melted butter can clump up when coming in contact with cold milk. Using a hand mixer rather than a whisk also helps everything to incorporate more smoothly.

If despite your best efforts, lumps still form in your icing, the best way to remove them is to microwave the icing to warm it gently, then mix it together again. Microwave for 10 seconds or less, at a time. You don't want to overheat the icing.

How to make the rolls

Cinnamon rolls are really easy to make with puff pastry. Lay the refrigerated dough flat on parchment paper or a floured surface, and then use a spatula to spread the filling mixture of butter, brown sugar, and cinnamon evenly across the dough.

Form the cinnamon rolls by rolling up the dough and then cutting it into 9-12 rounds, depending on your desired thickness. These are then baked in a 400-degree oven for approximately 20 minutes, or until golden brown on the exterior.

Can these be made ahead?

Yes! These cinnamon rolls can be made in advance and frozen before or after baking. If you freeze them prior to baking, let them thaw completely before placing them in your oven. If they are already baked you can reheat them at 350 degrees until warmed through. 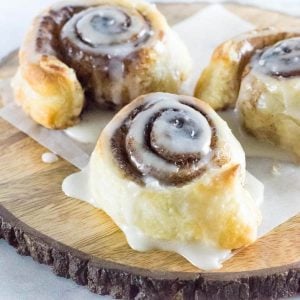 Using softened butter is important or things won't mix or spread as easily. Pecans can be added to the cinnamon rolls as well if desired. If you don't have a hand mixer, a whisk can be used instead.