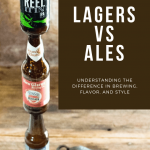 I mention this because most people seem to think lagers and ales are beer types like stouts, IPAs or pilsners. Every beer you have ever drunk is either a lager or an ale; similar to how every human is either male or female.

What is a Lager?

A lager typically ferments in temperatures ranging between 35-55 degrees. The process for brewing lagers typically takes longer because yeast work more slowly as these lower temperatures, resulting in the beer often being stored for weeks or months for cold conditioning that improves clarity.

The flavor of many lagers is considered to be crisper than their ale counterparts, with the taste difference being particularly less yeasty. This allows the flavor of hops and malts to shine through better.

Most people think of lagers simply as the popular Bud/Miller/Coors macrobrewery styles. However, there are many exciting and more flavorful varieties of lagers including Pilsners, Octoberfests, Bocks, Dunkels, and Marzens.

What is an Ale?

Ale is the opposite of a lager. It ferments in warmer temperatures between 60-75 degrees, and it doesn't need nearly as long to finish fermenting. Ales are particularly popular with home-brewers because of how quickly they can be brewed and the lack of additional refrigeration needed to store it.

Ales typically have a more yeasty and often fruitier flavor than lagers and are often described as full-bodies or complex. Also since bottom-fermenting yeast can withstand higher alcohol content, ales often are higher ABV than lagers. Popular styles of ales include Pale Ales, Hefeweizen, Kolsch, and Stout.

Will knowing this distinction make the beer taste better? No probably not. However, knowing more about what you are drinking will give you a better appreciation for it.