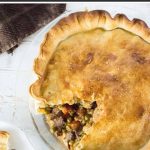 Venison pot pie is loaded with tender bites of venison and vegetables swimming in a savory gravy and baked to golden perfection in a double pie crust. The best thing about pot pies is how easy they are to customize to fit your tastes. Get creative and add or subtract vegetables and herbs of your choosing.

Ingredients you will need for this recipe

Changes you can make

Customizing the vegetables is easy. Green beans and corn are common additions. Shallots can be used instead of onion. When substituting vegetables try to cut back on your other vegetables if you are adding more in so the ratios stay similar.

You can also change the flavor of the gravy by adding wine, brandy, or beer. However, if you go that route I would probably remove the fresh herbs so the flavors don't compete. Some beers, in particular, don't match well with fresh sage.

Tips on the pie crust

The best pot pies use a double pie crust. You want one crust underneath your filling, and the other on top of it. Spraying your pie pan with a non-stick spray really does a good job keeping the crust from clinging as it bakes.

I also recommend using an egg wash on your upper crust. The egg wash gives the crust a show-stopping golden brown appearance. You can make an egg wash by lightly beating one egg with a tablespoon of water, then simply brushing it on the crust.

Pot pies seem like really involved recipes that can be intimidating to novice home cooks, but it really isn't too difficult. You simply need to make the filling, which is essentially a thick stew. Then you need to pour it into a pie crust and bake it.

You start by searing the venison in oil over medium-high heat. This only takes five minutes or so. Be sure to turn the meat as it brows so you get a good sear. At this point, the venison can be removed and the heat lowered to medium. Add the butter into the skillet along with the carrots, mushrooms, and onions. Cook until the vegetables until the mushrooms and onions are tender, then add garlic and cook for another minute.

Now the filling is ready to transform into a gravy. Lower the heat to low, and sprinkle in the flour, cook for 1-2 minutes to cook out the raw flour taste then slowly start mixing in the liquids. Once all of the liquid has been incorporated into the flour, all of the remaining stew ingredients can be added. Cover with a lid and let gently simmer for 30 minutes, or until the gravy thickens to your liking.

Tip: The gravy will continue to thicken as the pie bakes, so it is best to leave it a little thin before pouring it into the pot pie.

Spray a nine-inch pie pan with a non-stick cooking spray and place one pie doe in the bottom of the pan, stretching it up to the lip, then pour in the filling and top with the second pie crust. Paint the crust with your egg wash and bake in a 425-degree oven for 20 minutes, or until golden brown.

Can other wild game be substituted for venison?

Yes! Venison is not the only meat you can use in this recipe. Elk, antelope, moose, bison, or even beef would all be great substitutes. Use what you have available in your freezer. 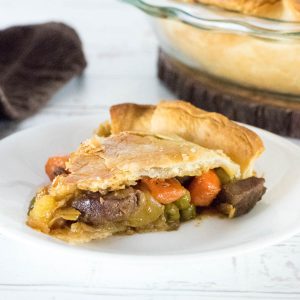 *Salt lightly because it will continue to thicken as it bakes, making the saltiness intensify. *Peas are not simmered because they will become mushy if cooked too long.