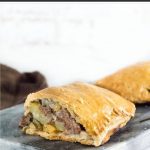 Michigan pasties are a whole meal folded into a pastry shell. Most commonly they are filled with beef and root vegetables then baked until tender.

These handheld meat pies are popular with my Yooper neighbors to the north in the upper peninsula of Michigan who made these portable meals for Cornish miners. Although still closely associated with Michigan, the pasty has gained a foothold in northern Wisconsin as well where you can still find roadside pasty shops selling these treats.

Like any meal, there are a million different ways pasties can be prepared. However, the traditional Cornish pastry, first popularized in Cornwall, United Kingdom was primarily made with pastry dough, beef, potatoes, onion, and turnips.

Since crossing the Atlantic with settlers in Michigan, this dish has largely remained unchanged. It is still most commonly filled with beef, and root vegetables. However, it is not uncommon to see the variety of vegetables switched up on occasion.

In my recipe I go a step further and add fresh herbs (parsely and sage) to the mix, which I think livens up the flavor quite a bit. However, feel free to omit it if you wish to stay more traditional.

Begin by making your pie dough by mixing the flour and salt, then cutting in butter with a pastry cutter. Finally, mix in water until it forms into a ball. Knead the dough a few times then let it sit in the refrigerator for at least an hour. This will make it easier to work with.

Prepare your vegetables and herbs by chopping them into small pieces, then add to a large bowl and mix together along with the salt and pepper. Separately, crumble your hamburger into small bits.

Remove your dough from the refrigerator and cut into six equal pieces and then flatten them into ⅛" discs. Pile each round of dough with the vegetable mixture, then top with beef and one teaspoon of butter then fold the dough shut. Crimp the edges with a fork to ensure it remains closed.

Finally, beat an egg in a dish and then paint the exterior pie dough with the egg wash to add a glossy shine as it bakes. I also like to sprinkle on a little kosher salt.

Bake your pasties in a 350 degree oven for 1 hour, then remove and let cool for 5-10 minutes prior to serving.

What is a Michigan Pasty?

The Michigan pasty was popularized by Cornish settlers in the upper peninsula of Michigan and consisted of a hand pie traditionally made with pie dough, beef, and root vegetables.

How is pasty pronounced? 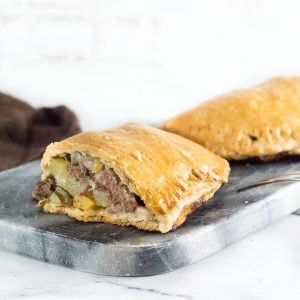 If using a fatty ground beef such as 80/20, the butter can be omitted as there will be enough fat to provide moisture. However, I like using a leaner ground beef and adding butter for the fat because it has better flavor.