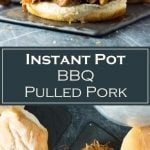 Instant Pot BBQ Pulled Pork is done in only a fraction of the time compared to a traditional recipe, yet it still holds all of the big barbeque flavor you crave!

The other day we lost one of the greatest minds of our time, and I have been getting a lot of messages about it. Just to clarify a few things, Stephen Hawking and I weren't actually fierce academic rivals. I never met the man. As far as I am aware, he has always conceded I make an infinitely better BBQ Pulled Pork. Unfortunately, his recipes only worked in theory.

During the summertime, I enjoy spending a lazy Saturday smoking a pork shoulder to make authentic BBQ Pulled Pork. However, not everyone has 8 hours free to fuss over a smoker all day. Enter the Instant Pot. Your family can enjoy great barbecue flavor in a fraction of the time and effort.

What is Instant Pot

Instant Pot is a new cooking appliance that combines the ease of a slow cooker with the speed of a pressure cooker. Meals that once took hours can be prepared in minutes. It is no wonder why this multitasking appliance has taken the world by storm. I was initially skeptical of it, thinking it was a fad, but I promise you, it is here to stay.

The Instant Pot can saute, pressure cook, slow cook, steam and more. If you don't already have one in your kitchen, order an Instant Pot. If you are still on the fence, just read the 27,000+ Amazon reviews.

Making pulled pork in an Instant Pot is a little different than slow cooker pulled pork. The Instant Pot gives you the ability to sear the meat, which is a great way to add additional flavor. If you are pressed for time, you can skip that step, but the maillard reaction that browns the meat will add another layer of flavor.

The best meat for pulled pork is pork shoulder, otherwise known as Boston butt. You want a fatty cut of pork because it will render into mouthwateringly tender and juicy shreds when it is done cooking. Please don't use a leaner cut like pork loin. You will be wasting money on more expensive meat, and your final product will be much drier, with much less flavor.

A four-pound pork shoulder will take 90 minutes to pressure cook in an Instant Pot. When cooking is completed, let the steam release from the pot and remove the lid. The pork shoulder will be fork tender, allowing it to be effortlessly shredded into pulled pork.

You will notice there is a lot of excess liquid, but that will incorporate into the meat as you shred it. You need liquid to generate the steam needed for pressure, but you don't want too much liquid that the final product turns into a soup. For this reason, my recipe only calls for ½ cup of cider vinegar. Many other recipes call for considerably more liquid, often a couple cups of flavorless water that will do nothing other than dilute the flavor. 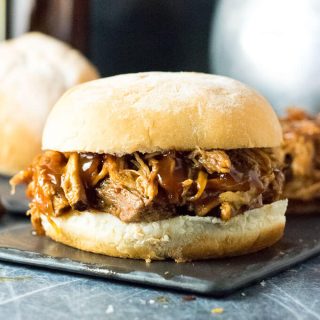 If you are making BBQ Pulled Pork, you are going to want some Homemade Cole Slaw to go with it! You will love this recipe!

If you enjoyed my Instant Pot BBQ Pulled Pork recipe then you should probably like me on Facebook and follow me on Pinterest too. That’s what I would do at least, because if you don’t get to know me but you still use my recipe it is kind of like taking candy from a stranger, and your mom taught you not to do that. Don’t disobey your mom, subscribe to Fox Valley Foodie today.