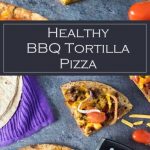 Whole wheat tortillas are piled high with lean ground beef, BBQ sauce, hearty toppings, and just the right amount of cheese to create a Healthy BBQ Tortilla Pizza that you will crave, without the guilt.

Like a stranger wandering into a saloon in the wild wild west, longtime readers of this website know we don't take too kindly to healthy recipes around these parts. You best pack up your cauliflower flavored everything and just mosey on down the line. So when you see a recipe like this Healthy BBQ Tortilla Pizza come across your path, you better believe it doesn't sacrifice an ounce of flavor.

Let's be honest, most diet food tastes like crap. Don't tell me it doesn't. If it didn't, everyone would be skinny. However, this Healthy BBQ Tortilla Pizza is downright mouthwatering regardless if you are on a diet or not. I originally discovered it in Gourmet Nutrition: The Cookbook for the Fit Food Lover while I was dropping 50 pounds, but I've since modified the recipe to better fit my tastes and continue to make it today.

How to Make Pizza Healthy

Pizza is quite possibly the world's most popular comfort food. Full of carbs, cheese, and fatty meat toppings, there isn't much healthy about it. However, you can make a pizza healthy with some simple substitutions. Using a whole wheat or whole grain tortilla adds more nutrition, fewer calories, and creates a perfectly crispy crust. Additionally, my recipe calls for extra lean beef such as 93/7 beef. This packs considerably less fat than the 80/20 beef traditionally used for burgers and meatloaf. Finally, we use just enough cheese to add big Cheddar flavor, without overwhelming the pizza in a cheesy blanket.

To infuse this healthy tortilla pizza with big BBQ flavor we mix barbecue sauce with the lean ground beef after it has been browned. This not only doubles as the sauce for the pizza, but it packs the beef with a ton of flavor. Onions, red peppers, and grape tomatoes all pair nicely as toppings for a BBQ pizza. However, feel free to customize it to your tastes. If you like things spicier, use poblanos, or jalapenos. A smoked cheese would also be a ridiculously awesome substitution that could shatter your taste buds.

How to Make Tortilla Pizza

A tortilla pizza will bake faster than a traditional pizza. For this recipe, the toppings are prepared on the stovetop first. You will brown the meat, and then cook the onions and peppers just enough to let some heat sink in, without fully sauteing them. Once BBQ sauce is added to the mixture it is ready to be placed on the tortillas. The toppings will finish cooking while you bake the tortilla pizza in the oven. Bake the tortilla pizzas at 400 degrees for 10 minutes. You just want to bake them until the cheese has melted and the crust is crisp. 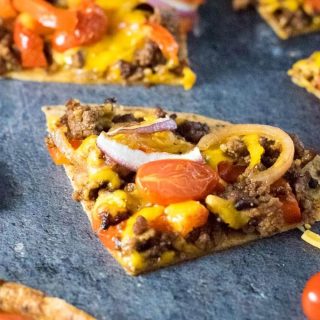 IF YOU LIKED THIS RECIPE you will love my Healthy BBQ Rice Bowl too!

If you enjoyed my Healthy BBQ Tortilla Pizza recipe then you should probably like me on Facebook and follow me on Pinterest too. That’s what I would do at least, because if you don’t get to know me but you still use my recipe it is kind of like taking candy from a stranger, and your mom taught you not to do that. Don’t disobey your mom, subscribe to Fox Valley Foodie today.