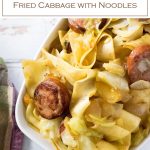 My Haluski recipe features cabbage and onion sauteed in butter until tender and beginning to sweeten, then tossed with hearty egg noodles. Halusky can be served as a vegetarian dish, however, I like to round out the meal with the addition of Polish sausage.

Haluski is an easy Eastern European dish that has roots in many different countries. It is particularly popular with Polish and Slovak nationalities, however, due to the simplistic nature of the base-recipe, there are as many different ways to make haluski as there are claims of origin.

How to Make Haluski

Though it can be baked, I love making haluski as an easy stovetop meal in a large non-stick skillet (affiliate link). I begin by searing sliced Polish sausage until browned and cooked through, then in the same skillet cabbage and onion are slowly sauteed in a generous amount of butter until tender and beginning to brown. At this point, the sausage, cabbage, onion, and egg noodles can be combined and served.

Tip: When chopping cabbage for haluski, I cut the cabbage in half and then into quarters. When it is quartered the core is more exposed and easier to remove from the cabbage leaves. Once the core is removed, I cut one more time into eights, then chop the leaves for sauteing. For step by step photos, check out my how to cut cabbage tutorial.

Though this recipe is for haluski with noodles, dumplings are a very popular alternative to use as well. If you are going the easy route you can just buy gnocchi at the store, though bonus points will be awarded for making gnocchi from scratch. Alternatively, this is a perfect dish to use homemade spaetzle too.

I prefer to make haluski with Polish sausage, however, if you are looking for other protein alternatives pancetta and bacon are both popular. If using bacon I recommend draining the grease or using less butter. Ham can be used as well and is a great use for any leftovers you may have after a holiday meal. Alternatively, this dish is often served without any meat. 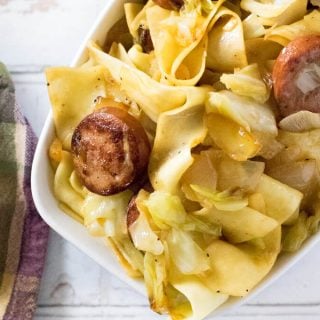 Tip: To prevent egg noodles from clumping together, try to finish cooking them when they can be immediately combined with the sauteed cabbage and onions. Otherwise, tossing the egg noodles with olive oil will help keep them separated if they have to sit for a few minutes.   IF YOU LIKED THIS RECIPE you will also love my Wiener Schnitzel with Lemon Dill Sauce.